Posts from the ‘Gill Pemberton’ Category

Something I have only discovered a year or so ago thanks to Maija from Copenhagen.  Maija found some fantastic looking Denby Salt & Pepper shakers with teak bodies. I have seen Denby items before  combined with teak trays or stands but haven’t seen this before – where the teak is used as part of the form or design.

The first use of teak used to compliment Denby Pottery I have seen to date is from Gill Pemberton’s “Arabesque” series, – which matches the time period teak started to become very popular (the early 1960s through to the mid 1970s)

A quick Google search for Denby+Teak resulted in dozens of images of Denby S&P’s with teak bases, mostly from the Potter’s Wheel series – with some fantastic colour variations.

The first 2 images below are from Maija – and it is a bit hard to know if these are from a particular  Denby series, or if they were produced as stand alone pieces to go with a variety of designs. I think they are closest in colour and glaze to Arabesque – but their shapes bear no relationship to the strong angular shapes of the Arabesque pieces.

I have often read these designs were a collaborative Dansk – Jens Quistgaard design which is incorrect, but finally I have been able to identify their designer.

The Danish link was correct, but the wrong assumption of Quistgaard has been made by many people. Gill Pemberton tells me these were designed by freelance Danish designer Kurt Franzen c1974, who also created for Denby the very smart “Gourmet” (second version, not the Kenneth Clark version) dinnerware series. It appears to have been renamed the “Gourmet Vanilla” pattern soon after release.

END_OF_DOCUMENT_TOKEN_TO_BE_REPLACED

Denby Mayflower (stamped Langley Mill) was designed for the American market by Gill Pemberton at Langley Mill, Nottinghamshire in 1964 while she was pregnant with her first child.

Its “homespun” quality was immediately popular. The plates and bowls of Mayflower have an upright spray of 3 flowers in yellow, brown, orange and grey. To me the Mayflower design stands out immediately as one by Gill Pemberton.

It was the first of several other similar stylised floral patterns including Sherwood, Canterbury and Chatsworth for which Glynn Colledge designed the patterns on Gill Pemberton’s Mayflower forms.

Each had a typically Denby glaze with stylised and hand painted floral decoration on the plates and bowls. Other companies tried to emulate many of the Denby designs of this time, but none matched the design integrity and artistry of the Denby hand painted originals.

The forms for these series had dark brown ribbed coffee pots and the jugs had an unusual projecting side handle – a further evolution of the side handle Gill had used on some pieces in her Chevron series. 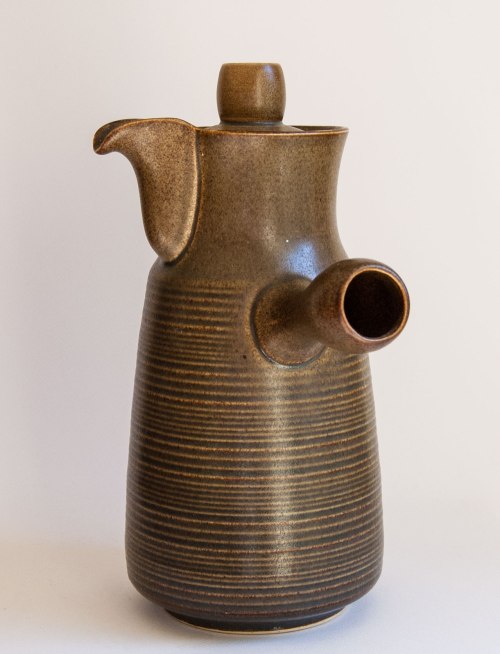 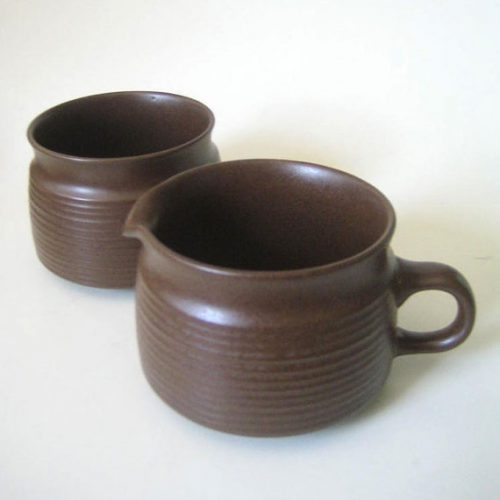 The following interesting background comes from the Wikipedia page for Langley Mill Pottery – it is worth having a look at the whole history of the Langley site which has been well written and put together. END_OF_DOCUMENT_TOKEN_TO_BE_REPLACED

An interview with Gill Pemberton and her early years at Denby Pottery. A fascinating glimpse into how the Chevron design developed and life in a pottery works in the 1960s. The interview was originally published on my first website in 2010 (Retro Pottery Net)

Yes, THE Gill Pemberton! she who designed the renowned and admired Denby Chevron, and Arabesque amongst others. Gill contacted me a while ago when she had discovered my blog – and clarified a few things I wasn’t clear on with the production of Arabesque.

Gill left Denby in 1981 and pursued a whole different career which I hope we have the chance to discuss in another interview, but for now lets hear all about Chevron.

Gill, At Art College what were your major studies and preferences,…. were you planning to become a ceramic designer?

I won a scholarship to study at Birmingham College of Art and Crafts for 4 years, first 2 years general art and crafts (lettering, life drawing, silver, sculpture, embroidery, and pottery etc), for the last 2 I chose to specialise in Pottery.

….Then I got a place at The Royal College of Art in London, to study Industrial Ceramics for 3 years. In my first year, we all had to choose, study, draw, and MAKE some pottery piece in the Victoria and Albert Museum. I chose a small 18th century china teapot, covered with enamel painted flowers. It took a year of hard slog, but I learned SO MUCH about modelling, mould making, glazing, not to mention making the body, and of course that flower painting!

It was such an incredible experience to be able to handle such a fragile ,beautiful piece, almost in touch with the maker…..and modelling the handle and spout….in the shape of a dragon!, It showed me skills I didn’t know I had !

I spent many warm happy hours in the V&A,…..no TV in those days ! And no money to heat my basic bedsit! Looking back I can see the value of all that time looking at and sketching such treasures.

We also had the opportunity each week to do life drawing, taught by Arnold Machin [he of the Queen’s head on stamps and coins], and looking back again I see how much I learned from him about form, volume, shape, not to mention how to draw !

I spent the next 2 years making stacking teapots, cups jugs, and doing the obligatory flower painting. In the fifties England was in very austere times, not much had changed since the thirties, and rationing and restrictions on the pottery industry meant they wanted designers who could do beautiful watercolour flower sprays on existing shapes, but this was NOT for me ! I was quite sure I could produce MUCH better tableware than was in the shops, so YES, I did plan on being a designer, but not the kind Stoke on Trent wanted!

Were you given a specific brief, role or an outline of what Denby wanted when you started as a designer starting with Denby?