Posts from the ‘Lillerød’ Category

Lillerød Pottery in Denmark had a long history from 1893 to 1995, but its history is not widely documented. Its story is an example of what I often come across when researching pottery – whereby one potter or pottery becomes well known and well documented, and others simply fade into history for no apparent reason other than coincidence.

Lillerød Lervarefabrik was established in 1893 by J.P.Hansen who built up a thriving pottery with a strong export business. In 1954 it was taken over by Einar Petersen who ran it until its final closure c1995. The output consisted mainly of domestic wares such as jugs, bowls, plates etc – hand painted with simple and attractive designs which reflected their time.

In the early history of the pottery there was an association with local artists, and an important but lesser known Potter and Artist Karl Schrøder is believed to have worked with Lillerød Pottery- or at least use it’s facilities around 1901, and you can read an interesting story about Karl Schrøder in the Allerød local history archives HERE

The youtube video below also gives a good idea of the style and range of work from the early 20th Century right up until its closure. The pottery re-openend briefly after its closure in 1995, but finally closed with a final exhibition in 2006 when this video was made.

Pottery with the stamp “Lillerød” was made from 1955, but before that date I haven’t found what mark, if any were made on the base.

The stoneware “Matenity” Jar in the first image is a traditional Danish form which in earlier times was used to take cooked food to Women who had recently given birth. The form has endured, and is still made by some potteries. 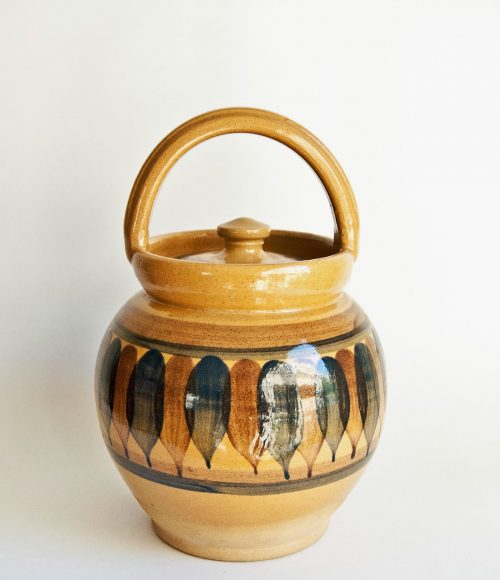