Posts from the ‘Queensberry & Hunt’ Category

This very smart design from Bing & Grondahl is called “Tivoli”, and was designed by Martin Hunt c1970s.

Martin Hunt, Co-Designer of the award winning Hornsea Lancaster Vitramic and a huge number of other Hornsea designs  – also designed several dinnerware series for Bing and Grondahl and Rosenthal. The Bing & Grondahl designs  include Tivoli, Korinth and Cumulus (decoration by Carl Harry-Stalhane) .

The same forms Martin Hunt designed for Tivoli were also used on the series Delphi, Olympia,  Sahara, Troja, Corinth, Marrakech and Casablanca. All of these designs are now quite hard to get hold of.

If you want to see more Martin Hunt designs go to the V&A collections online here for Martin. They have a very large collection of his designs from the 1970s until current day, including some of the B&G designs mentioned above. 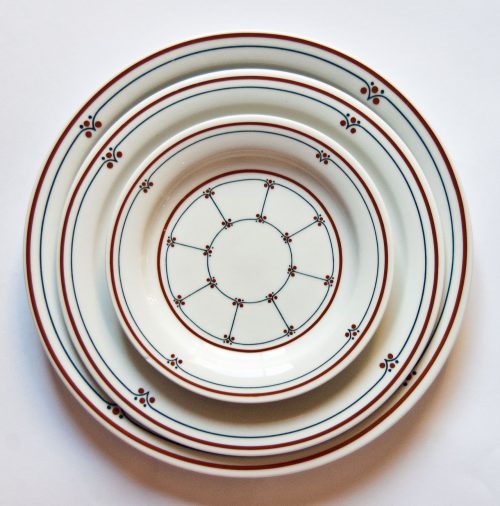 END_OF_DOCUMENT_TOKEN_TO_BE_REPLACED

Hornsea Pottery, Lancaster Vitramic “Contrast” has become a British design icon. It won the British Design Council awards for design in the 1970s. It features a stunning chocolate velvety matt brown glaze with a black gloss band and bright white interior. The forms are simple, elegant and beautiful – they remind me of the purity of the forms of Denby Chevron with its clean, elegant lines and forms.

A brief history of the design:

In 1972, after years of compromise by adapting and adding to their first factory, Hornsea Pottery needed to expand due to its success. A new (second) site was found and the official opening took place in 1976. The first three ranges produced at the Lancaster factory received Design Council Awards and with them Hornsea Pottery enhanced its already worldwide reputation.

Hornsea Pottery had marked its silver jubilee in 1974 by launching a celebration range of products and this led to a collaboration with Lord David Queensberry and Martin Hunt. Together, in 1974, they produced a very successful range of “Lancaster Vitramic” tableware designs, starting with Contrast. END_OF_DOCUMENT_TOKEN_TO_BE_REPLACED