Posts from the ‘Ulla Procope’ Category

Arabia Kosmos was a pattern on the very popular “S” Model forms designed Ulla Procope in the 1960s, and the Kosmos pattern was designed by Gunvor Olin Gronqvist.

Kosmos was in production at Arabia Finland c1962-1976. Because this was a hand painted design you will get quite a bit of variation in the lightness and darkness in the pattern.

Kosmos came in two colour variations, of which the blue one is less commonly found these days. I love the subtle shifts of reddish to yellow ochre colours in the brown version. 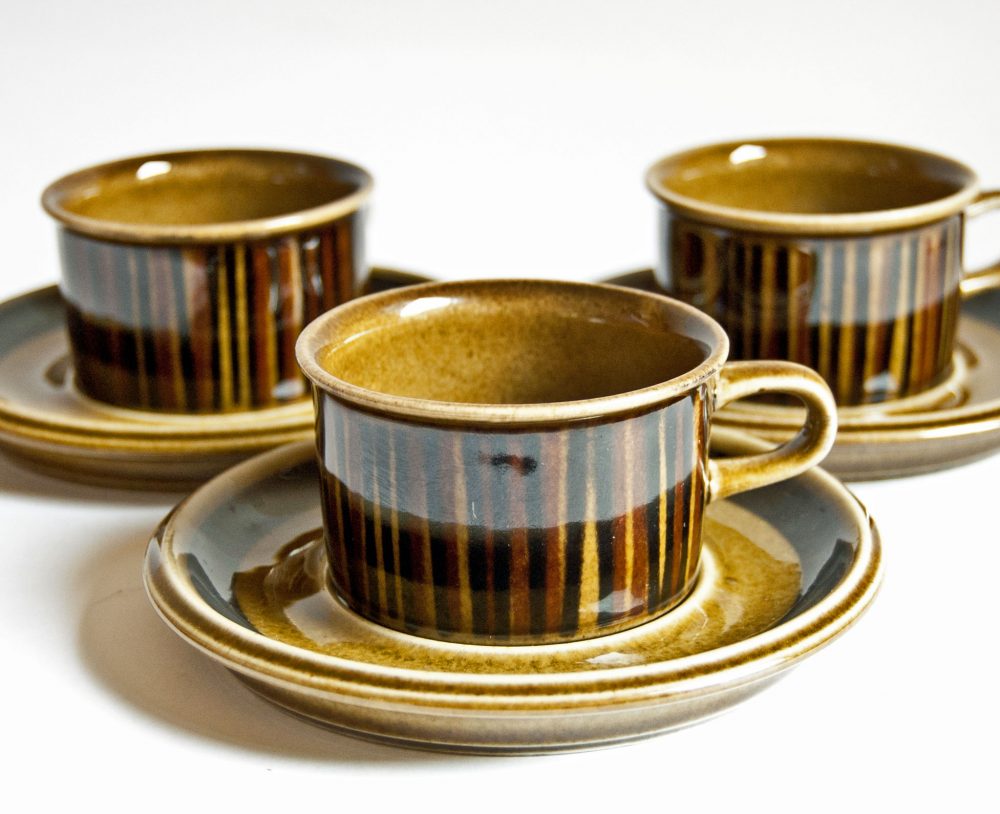 END_OF_DOCUMENT_TOKEN_TO_BE_REPLACED

Arabia Finland designs Anemone and Rosmarin were patterns designed by Ulla Procope, both around the same time. I see variations between the exact dates, but both appeared to have been in production c1962 to c1976. I have seen Anemone described as being in production until 1993, but only from 1 source.

The designs are on the same “S” shape series of forms as was “Ruska” and several other designs.

I find it fascinating how just a single colour can transform the appearance and often monetary value of otherwise the same object. Perhaps it has something to do with changing tastes. The brown reddish iron oxide of Rosmarin might remind too many people of the 1970s or 1980s whereas the blue of Anemone seems more timeless.

Anemone tends to bring much higher prices on the resale market than Rosmarin.

The pattern is the same, and forms are the same – its only the colour that is different. This colour though changes the appearance of how the design ‘sits’ on the surface, in addition to the human eye often having a preference for blue colours over brown.

There are also more variations in intensity of colour in Rosmarin than in Anemone – the strength of the iron in the colour can vary from an almost wash-like appearance on some pieces of Rosmarin, to a wide range of dark and light iron oxide hues on other pieces. Anemone doesn’t seem to have quite the same variations.

It may also have something to do with the chemical difference between the 2 oxides – cobalt for Anemone, and iron for Rosmarin. Regardless though, I find it all quite interesting how colour can transform the same object. 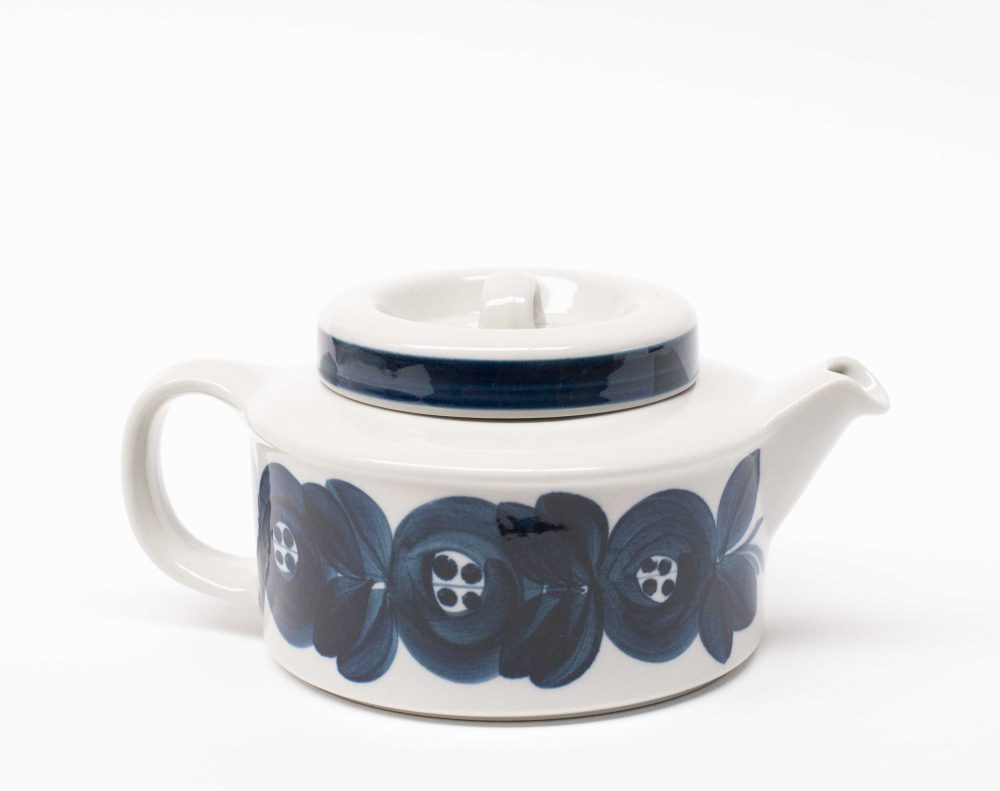 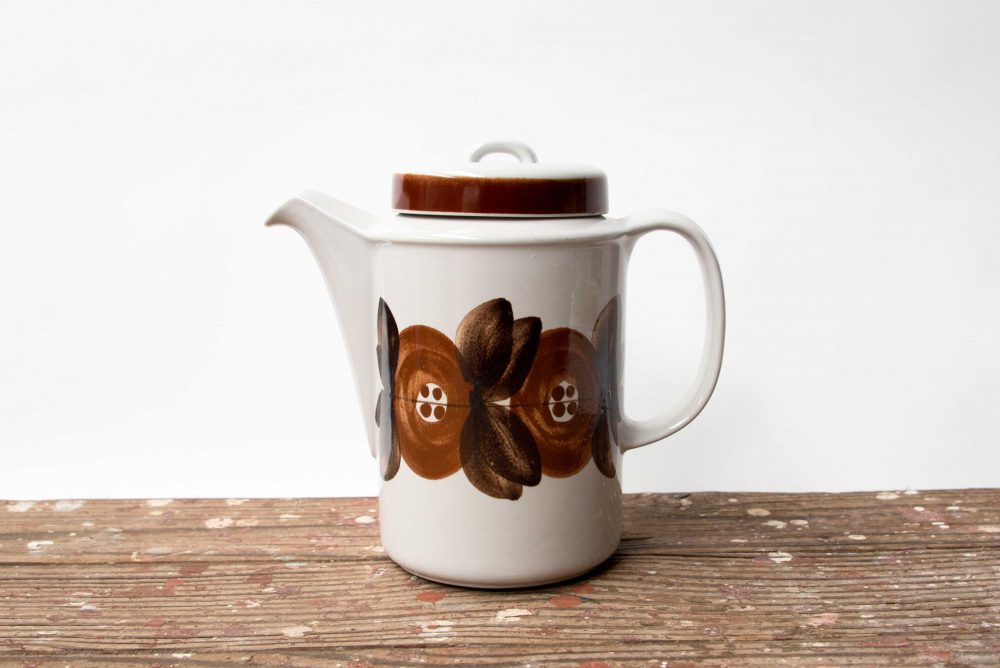 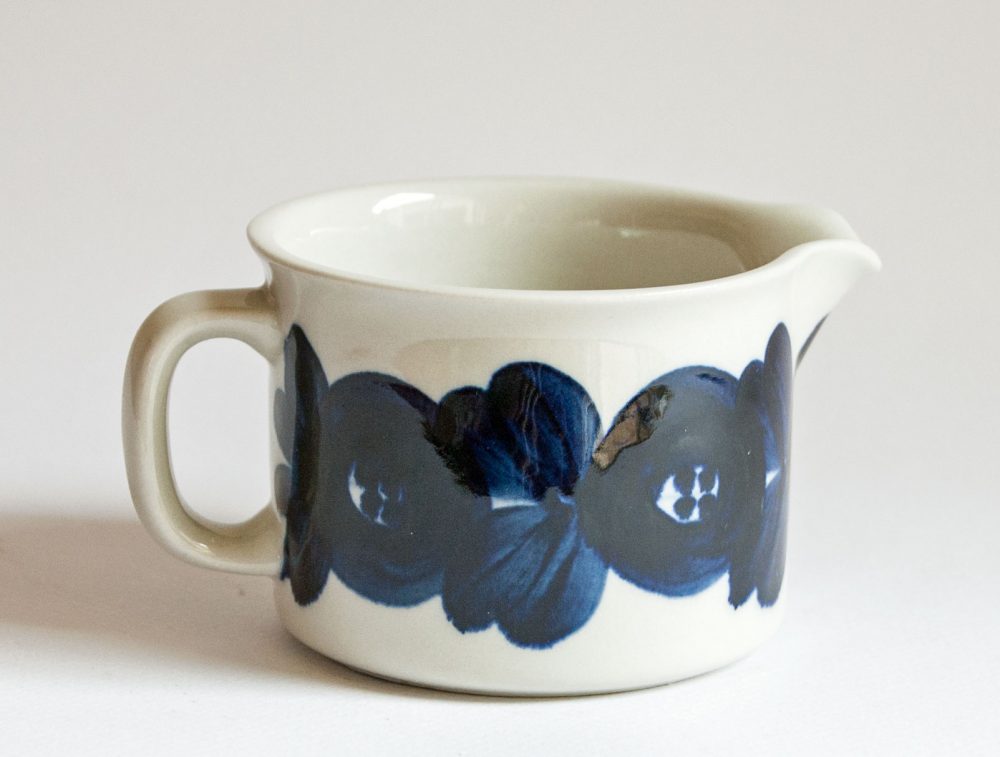 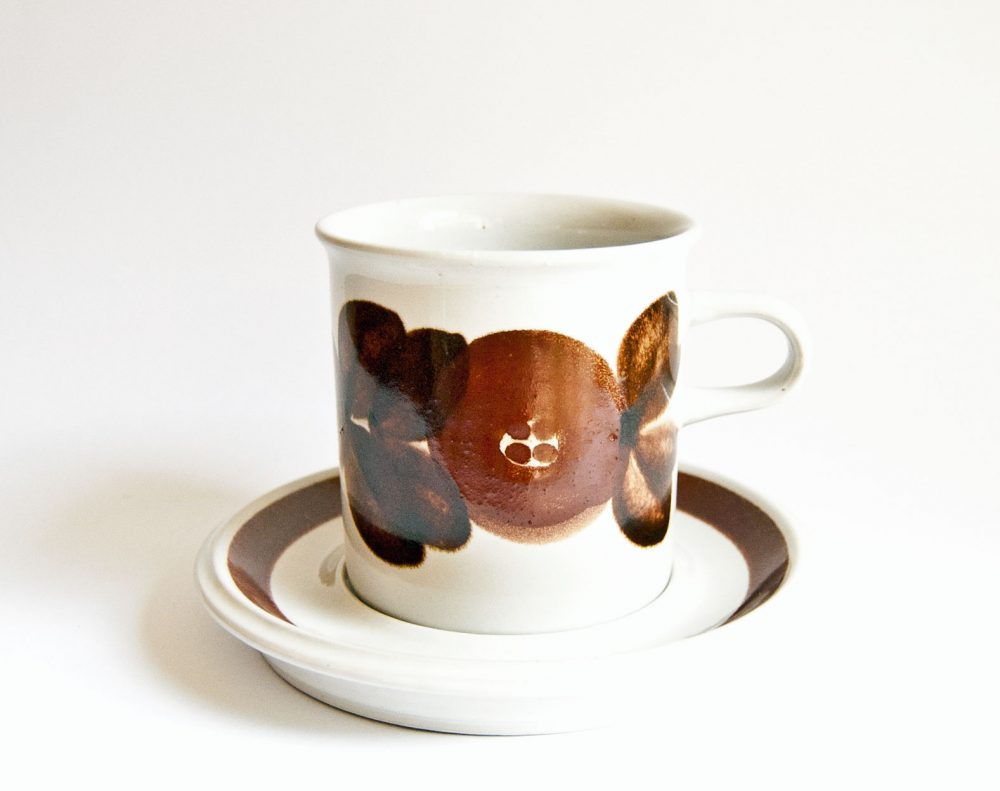 END_OF_DOCUMENT_TOKEN_TO_BE_REPLACED

Ulla Procope was the designer of the forms for this now iconic series of teapots by Arabia Finland. It was produced from 1955 to 1972 in a hard earthenware. There were 2 sizes that Im aware of. There were also accessories such as a such bowl and milk jug which you don’t see very often now.

The simple, streamlined and elegant modernist form with its cane or rattan handle has become a classic, and much loved design.

It was released several plain colours including plain white, stoneware brown and black (in both matt and gloss finishes)

Probably though, it is the designs by Hilkka Liisa Ahola on the GA forms which have become the best known and most often seen nowadays.