I bought the vase below at auction some time ago, not knowing anything about the design – but it just had that quality of something special.

With help of a reader in the U.K. who had the design in another shape, it was finally identified when she wrote to Royal Copenhagen who identified the design.

“Your vase is actually very rare. So rare that it is not mentioned in the book about “Aluminia” by E. Winge Flensborg, which has a list of the known items of a small series of vases from 1943/44, named “Løvspring”, by Nils Thorsson. Aluminia was the earthenware factory run together with The Royal Copenhagen Porcelain Factory. Due to the situation under the war there was a shortage of raw materials and Thorsson sought to come up with alternative materials. This series is made from red clay. The items came with glazes in various colours: Yellow, brown, green and blue over a scrafitto-decoration.  It was a very short lived production.”

The piece is made from terracotta clay and the surface colour comes from what appears to be a clay slip brushed over the clay and then covered with a clear low fired (borax probably) glaze which is pitted with tiny air bubbles typical of low fired glazes using easily available inexpensive materials. The sgraffito design is really makes the piece. Like many early pieces of Nils Thorsson it is not signed, but stamped for 1944. The shape is number 2338 – (16x 12cm).

Since being identified, I have seen the design on odd occasions, but it remains an elusive design.

END_OF_DOCUMENT_TOKEN_TO_BE_REPLACED

Knud Khyn was a an accomplished Danish painter, draughtsman and ceramic sculptor. My interest in his work lies in his evocative, superbly modelled ceramics.

His animal figurines capture so so well the mass and expression of his subjects, in addition to capturing the essence of their characters, how they move, and how they play. Many of these figurines use a glaze popular at Royal Copenhagen during this era – an iron rich “Sung” glaze – (fired in the kiln once only)

The figurines I come across most often are the “3 bears” by Knud, which come in several sizes. Going by the number of them that come up for sale still on the secondary market they seem to have been the most popular.  There is so much more Knud Kyhn work to discover though, and pictured below are some examples.

Together with his wife Julie Bloch Kyhn, Knud also operated a studio from their home in Farum from 1934. Pottery from this studio is usually marked FK for Farum Keramik .

This studio in 1993 was apparently opened to the public but from what I can gather, it was later donated by Bodil Kyhn (Knud’s Daughter) to the Farum Municipality which later sold the house, and the works were donated to the Næstved Museum. Kyhn’s work is also widely represented in major galleries around the world. 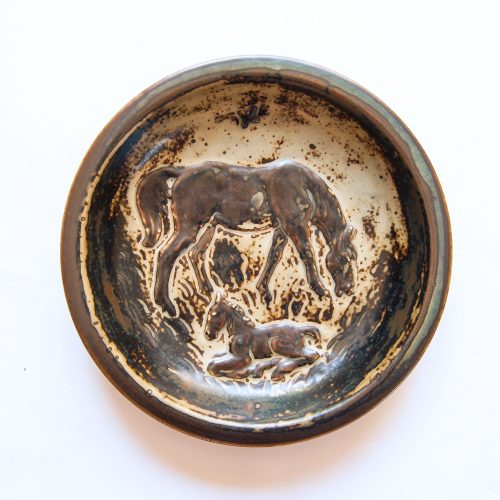 END_OF_DOCUMENT_TOKEN_TO_BE_REPLACED

Anne Marie Trolle (b1944- ) was one of the designers under the direction of Nils Thorsson in the group who created the now iconic Baca and Tenera series.

She also produced some very impressive designs for Royal Copenhagen in the 1970s and 1980s.

2 of Anne Marie’s designs which really stand out from the crowd to me are “Floreana” and “Indigo”.

My favourite is the Tea Caddy, from the Floreana series in 1982. 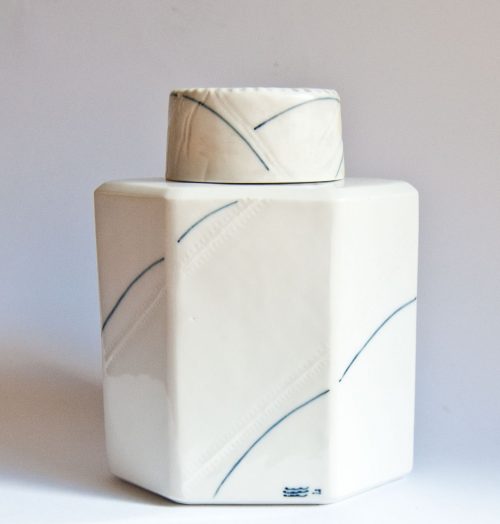 Part of a series of repeated shapes produced in a choice of patterns based on leaves and spotted fruits. Trolle recorded that this was inspired by a study trip to the Galapagos Islands, the decoration – and to some extent the shapes – reflect Danish artists’ traditional and instinctive response to oriental influences.
http://collections.vam.ac.uk/item/O168193/floreana-tea-caddy-and-trolle-anne-marie

But it is hard to go past “Indigo” for its clean Scandinavian forms and striking deep cobalt blue graphics. It was designed in 1975 by Anne Marie and was in production until 1985. END_OF_DOCUMENT_TOKEN_TO_BE_REPLACED