The Hjorth Factory was located in Roenne on Bornholm, and island off Denmark, founded in 1859 . It operated until 1993 and then re-openend in 1995 as a working museum. For much of its history it was operated by descendants of Lautriz Hjorth, its original founder.

In the 1880’s Hjorth pottery was being sold in the department stores of Paris, London and Berlin, and as far away as Australia and the United States. 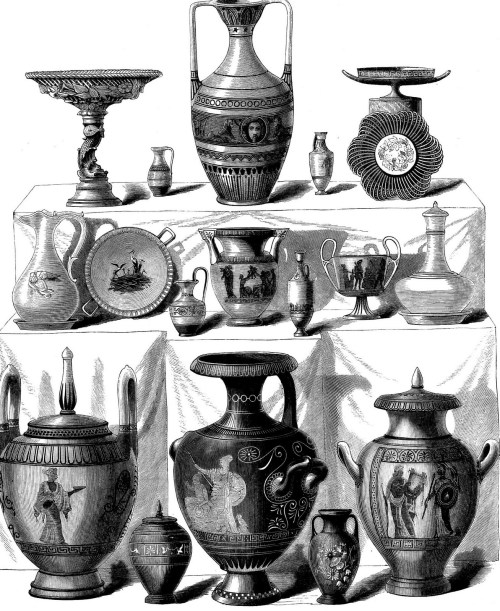 The image above is   from “The Art Journal 1876”. The engraving is entitled “Pottery of Denmark” which “has obtained large estimation in England and is highly valued in America” quotes the notation on the page, and goes on to say “the more prominent productions of Denmark are either copies from or adaptions of the forms and ornamentation of Etruria”

The pottery is not named, but some of it is early HJORTH pottery as in the Hjorth Catalogue for 1884.

Between 1862 and 1880 Hjorth ware was represented in “World Exhibitions” and was highly popular in the big department stores of Paris, London, New York and far away as Australia and the United States.

Around 1900 “Jugendstil” made it’s entry at Hjorth’s, represented mainly by a black burned terracotta. This work was inspired by the style of sculpor Bertel Thorvaldsen who’s work was manufactured at Hjorth. 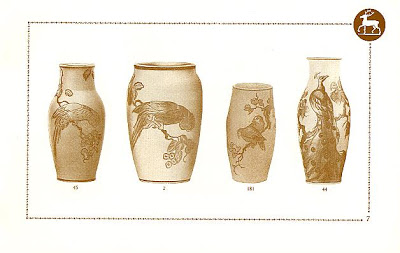 Above: A page from the Hjorth 1930 Catalogue – My Hjorth pieces photographed below are in the 1930s catalogue, which makes dating easy for a change!. Fortunately also there is a Hjorth Museum on Bornholm, with an online presence which has several of their catalogues from 1884-1967 digitised. The site is updated regularly, and the catalogues might be a bit hard to find, but the website is well worth a look HERE. 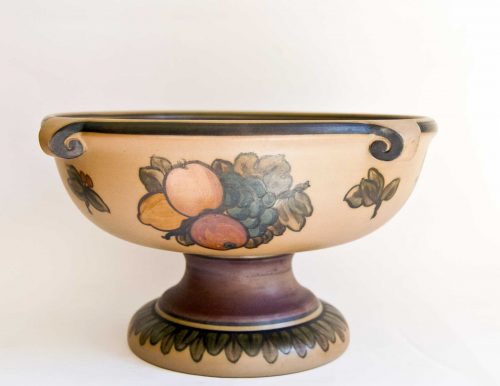 This early Hjorth ware comes up for sale regularly in Australia, due to its being imported in huge amounts around the 1930’s, (and still) . It is also very tough ware, stoneware fired, but has the loveliest of silky finishes. I broke a piece once and discovered the clay body is actually a grey brown colour, and the red terracotta colour you see is actually a coloured slip (clay finish) with hand painting on top of the slip.

The Hjorth backstamping is sometimes hard to read, but once you are familiar with it, its quite recognisable. There seem to be quite a few variations on the font, and size of font used. Sometimes the stamp is “Hjorth, Bornhom”, and sometimes “Hjorth Denmark” – possibly to do with whether it was for export or not. From 1927 a Deer was added to the backstamps. Most pieces have the shape number written or stamped as well, but as with all pottery there are many exceptions!

Alongside this style of pottery, Hjorth also produced from 1927 onwards what became very popular pharmacy jars and storage containers – initially in a blue colour, and then in a brown similar to salt glazed ware. The range was extended over time to include domestic items such as teapots, canisters, mugs etc.

During World War II Hjorth had to cease the production of the terracotta coloured decorative ware due to shortages, and instead started the production of white-glazed earthenware fajance, which can also  be seen in the catalogues I mentioned above. It was a wide selection of many item-numbers from tea-sets to bowls and dishes – often with narrow, close set grooves. This style was designed by Erik Hjorth (Peter Hjorth’s son).

Most people now recognise Hjorth pottery from the terracotta coloured Art Nouveau pieces of the first part of the 20th Century, but there is so much more to Hjorth pottery than this,  which you will see in the following article on this iconic Danish pottery.