Jette Hellerøe + Einer Hellerøe, Denmark
Jette Hellerøe: (b. 1940) Became a ceramist after studying at the Copenhagen school of fine arts in 1960. Her Father was Einer Hellerøe, and Jette worked at her father's factory before, during... END_OF_DOCUMENT_TOKEN_TO_BE_REPLACED

This article is a combination//summary of articles about Dybdahl Pottery, Denmark which I had posted on the previous incarnation of this website.
Further information will be added as I edit and add new information and photographs... END_OF_DOCUMENT_TOKEN_TO_BE_REPLACED

Villeroy Boch Acapulco
"Acapulco" released by Villeroy & Boch in 1967  is one the brightest and most colourful dinnerware patterns of the 20th Century, and is still highly popular on the secondary market. The design was... END_OF_DOCUMENT_TOKEN_TO_BE_REPLACED

Gill Pemberton, Denby Interview
An interview with Gill Pemberton and her early years at Denby Pottery. A fascinating glimpse into how the Chevron design developed and life in a pottery works in the 1960s. The interview was originally... END_OF_DOCUMENT_TOKEN_TO_BE_REPLACED

Recently I came across a very smart early Hornsea design in the form of a lidded butter dish. It is from the Hornsea “Summit” series – designed 1960, produced 1962 -1965. It’s designer of course John Clappison.

The summit series was very popular in its day with its modern tapering forms, fluted over the full height of the item with colour inlays of either apricot, turquoise, charcoal or terracotta on a white ground.

The glaze colour in the ridges was applied by hand on bisque fired pieces with a sponge and then wiped off – resulting in glaze colour being left only inside the ridges. The whole piece was then glazed with a transparent glazed and  re-fired to higher temperatures

Pieces in this series will have an impressed stamp on them indicating the form number – this butter dish is 260.

One thing that strikes me about these pieces is they are surprisingly fine and delicate for earthenware, which really compliments the fine and beautifully considered design. 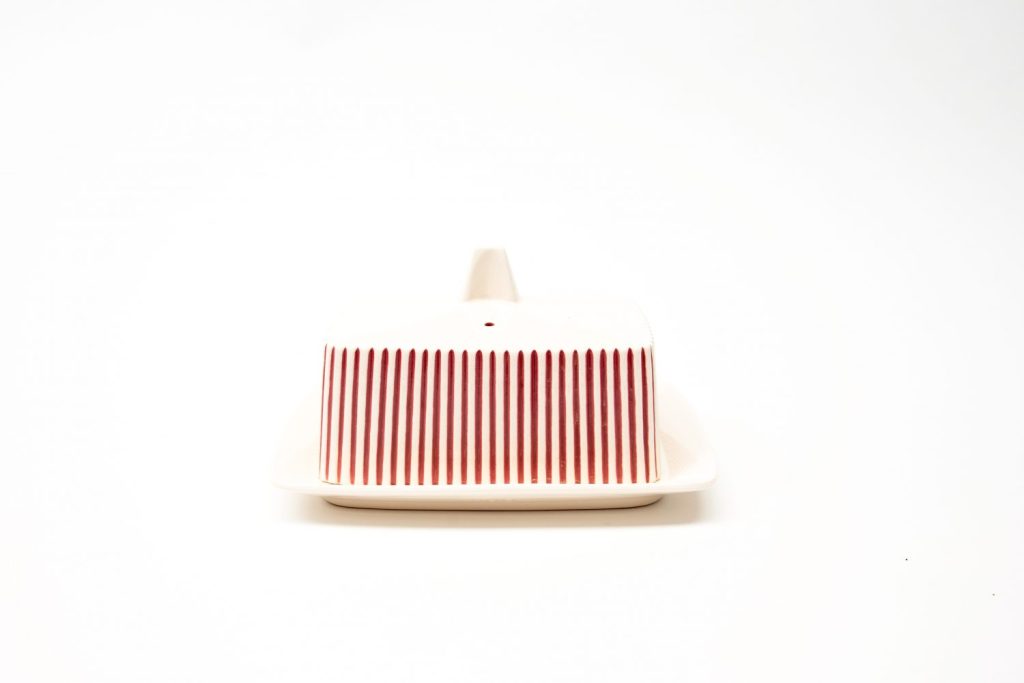 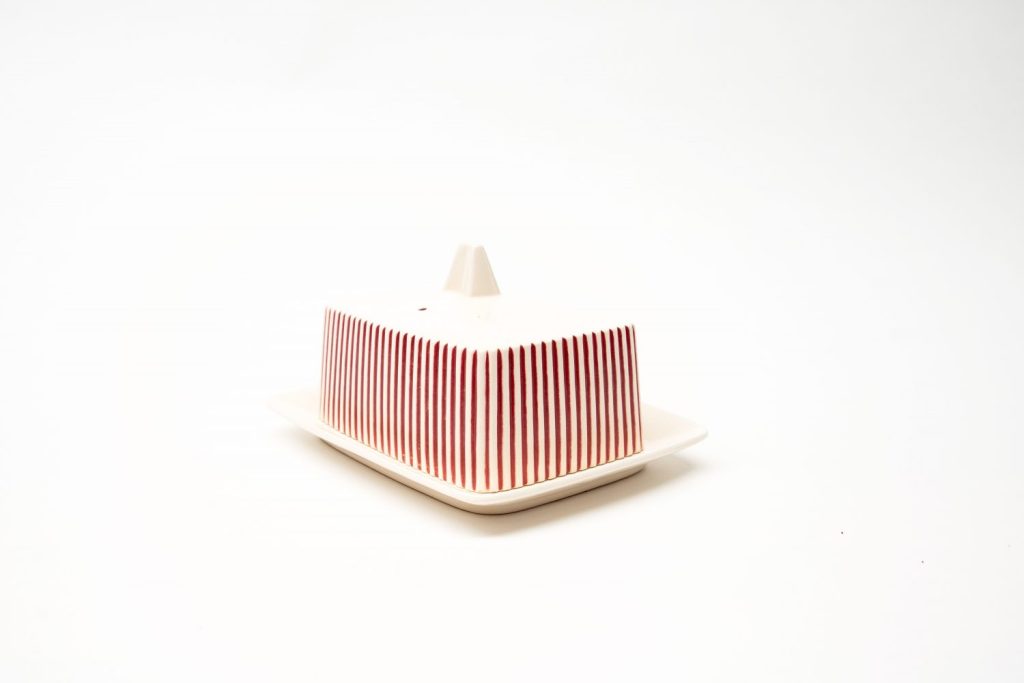 I came across the striking vase in the first images recently, and was immediately attracted to it. From the distance I thought it might have been a piece of Lapid Israel pottery, but on closer inspection it turned out to be British – by Cinque Ports Pottery Ltd, The Monastery. It is a pottery I knew next to nothing about so did a quick bit of research and in the process found some quite lovely pieces of British Mid Century pottery. (Cinque Ports is a historic series of coastal towns in Kent, Sussex and Essex U.K.)

Cinque Port Pottery was founded by David Sharp in 1956 with George Gray…the name was later changed to Cinque Ports Pottery Ltd and changed later again include the name of the operating premises at “The Monastery” when George Gray took over this incarnation of the pottery in 1964, after an amicable split between the two owners.

The pottery operated until July 2007 until its final closure.

The names and locations of this pottery can be a bit confusing, but you can read a more comprehensive history on the Studiopottery.com site or in the book “The Potteries of Rye: 1793 Onwards, Carol Cashmore” pub 1999 if you can locate a copy. (out of print)

END_OF_DOCUMENT_TOKEN_TO_BE_REPLACED

Rorstrand “Palett” is an impressive and bold design, which appears to be from the late 1960s or early to mid 1970’s, but sadly its designer is not known. It has elements in the design that many of the designers at Rorstand during this period used.

The design features hand painted bands in warm ochre hues with a blue circle as the centre of the design on most forms. There appear to be some variations on this theme – but at this stage I’m not sure if they are Palett or other named designs so will leave that idea alone for now.

It seems a hard design to find, and there are not a lot of images of it online, and they consist mostly of plates or bowls, but I did manage to find a photo of a cup that was for sale below.

It is also a difficult word to search for also, as even in quotation marks “Palett” changes to other spellings on search engines. If anyone comes across the designer listed in some archive, book or other publication I would love to know. 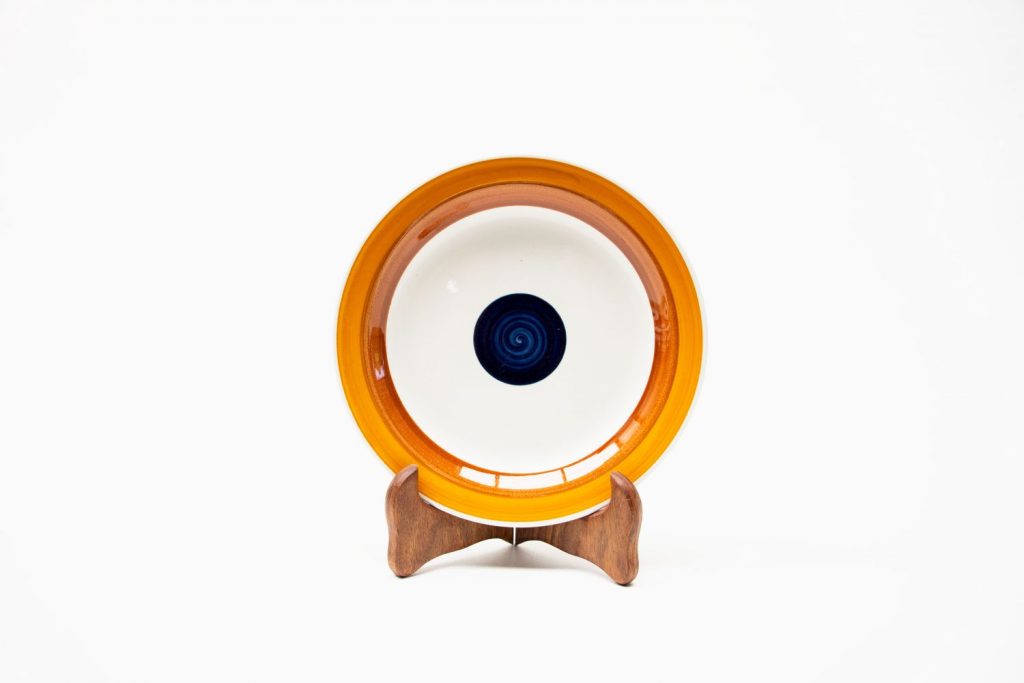