Posts from the ‘Portmeirion’ Category

This beautifully graphic pattern consisting of bold geometric shapes is “Tivoli”, designed by Susan Williams-Ellis for Portmeirion in 1964. It was created on the  striking “Serif” shape like many others by Ellis in the 1960s. The name “Tivoli” is a reference to the Tivoli Gardens in Copenhagen, which inspired Ellis to create this pattern.

Pictured is a storage jar from the series with its original lid – often now seen with cork lids.

Only in production for a few years as apparently it was not as successful as some of the other designs from Portmerion in the same era – although hard to see why! 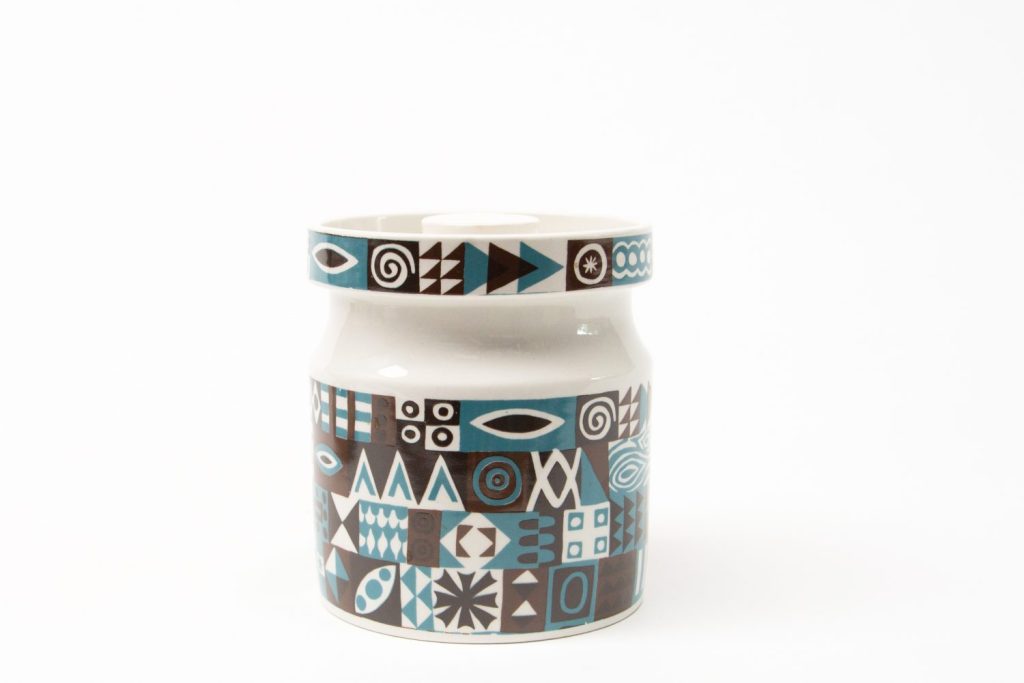 END_OF_DOCUMENT_TOKEN_TO_BE_REPLACED

I think this design is just magic. It is appropriately named Magic City. The design was inspired by exotic middle eastern inspired domed buildings, and always reminds me of this time of year with a festive look about the design with its use of colour and line which hint of fireworks, Christmas lights etc, as well as the domed buildings of the Middle East.

It was designed by Susan William-Ellis at Portmeirion Pottery in 1966, and has become one of the great British classics of the era. The forms were used in several series which Susan designed around this time – and the shape was called “Serif”. Serif refers to the shape of the handle – and is a reference to how a serif is used in typography/calligraphy to add flare to the end of a corner.

END_OF_DOCUMENT_TOKEN_TO_BE_REPLACED

Portmeirion “Totem” –  Was originally launched in 1963. It propelled Portmerion pottery into stardom and is now considered to be a design icon of the 1960s. It was designed by Susan Williams-Ellis (1918-2007) the owner of the pottery.

Like Denby Chevron and Arabesque by Gill Pemberton for Denby at the same time, it was a revolutionary design and created a sensation, as there was nothing else like it.

Additionally, in an era when the concept of a “working woman” was looked upon with suspicion, in Britain at least – the success of Susan Williams-Ellis as a designer, businesswoman, as well as wife and mother was extraordinary.

“Totem,” was successful into the seventies, and the motifs on the ware are the most copied of all design motifs of that period. I think there is something quintessentially Celtic or English Tribal about the design, but at the same time it has visual references to symbols of the atomic age, space exploration and satellites.

Totem had a striking cylindrical shape and beautifully textured surface, featuring stars and spirals, making you just want to touch it. These designs were carved directly into the moulds by Susan. It was originally made in 3 colours – blue, amber and dark green. The translucent flow glaze accentuated the relief pattern. White was introduced at a later date. 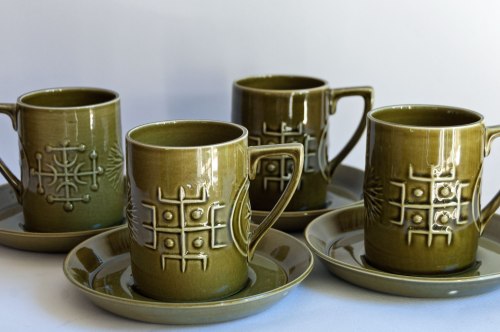 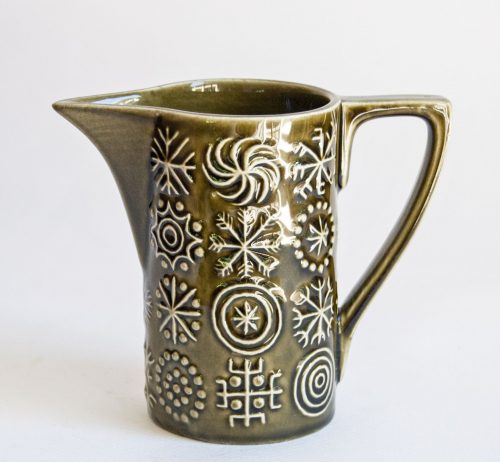 The idea for the shapes of the range was a practical one. When Susan and her husband had bought the pottery a few years earlier, it had been Kirkham’s Pottery. In the factory there were a large number of cylindrical moulds that had been used for making medical, pharmacological and laboratory vessels. Susan put them to creative use in designing the Totem range. END_OF_DOCUMENT_TOKEN_TO_BE_REPLACED