This very seventies looking design is from German maker Hutschenreuther.

The pieces in this dinner set are a high fired stoneware.  The glaze is a glossy orange glaze on a brown clay. Where thinner the glaze allows the brown clay body to show through (e.g. the ridges and corners), but also on the outside of each piece often the orange glaze has brown undertones on smaller pieces. The glaze also has a lovely subtle orange peel type texture in parts.

It was part of the “Hartkeramik” series from Hutschenreuther head designer Renée Neue in the 1970s. Neue is well known for his use of bright bold colours, striking vases, and the bold dinnerware designs for the company during this period.

The forms in this series bear some stylistic similarity to the well known Thomas Germany, “Scandic Shadow” series of tableware designs by Scandinavian ceramic designer Hertha Bengtson, and is typical of the design from this era. 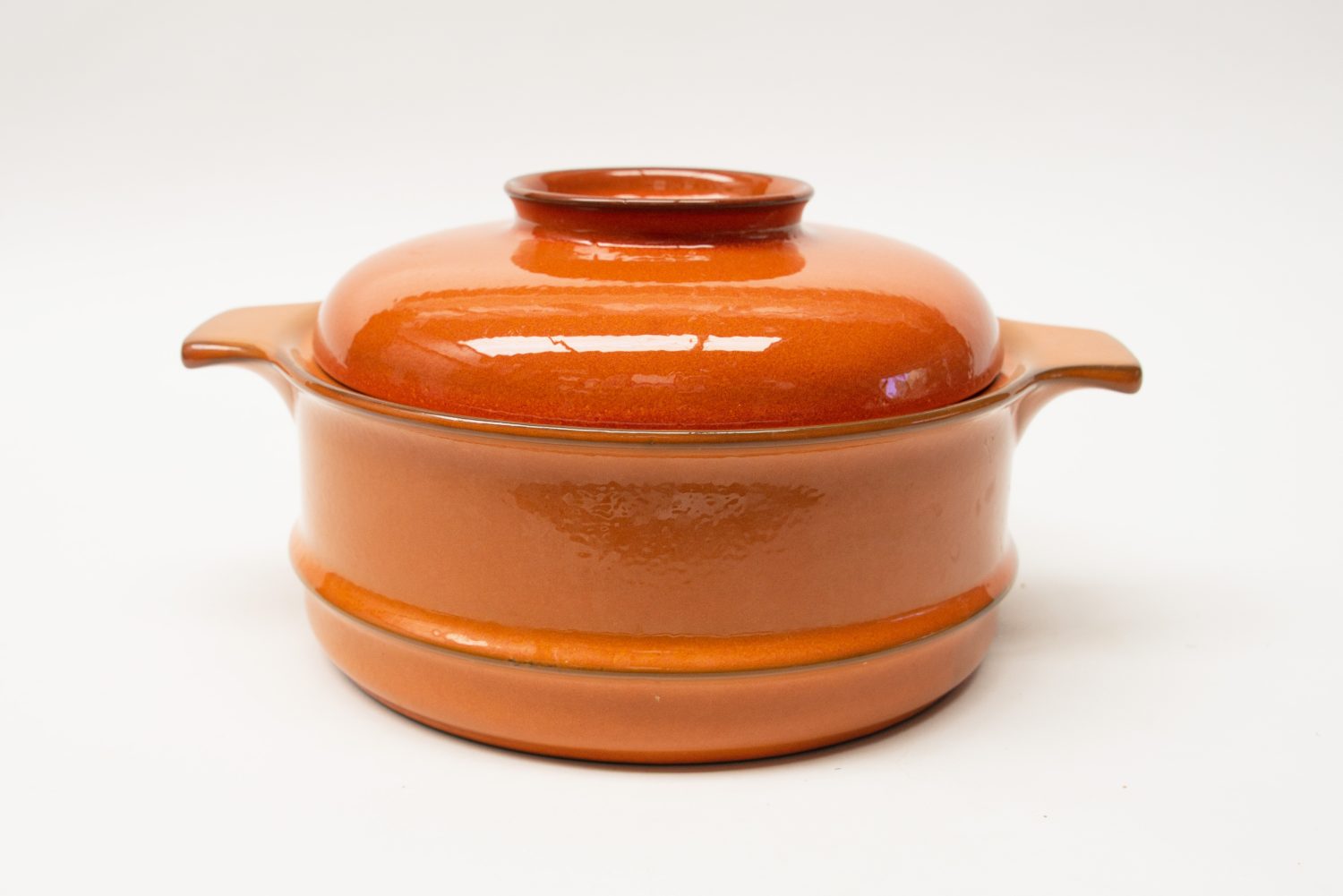 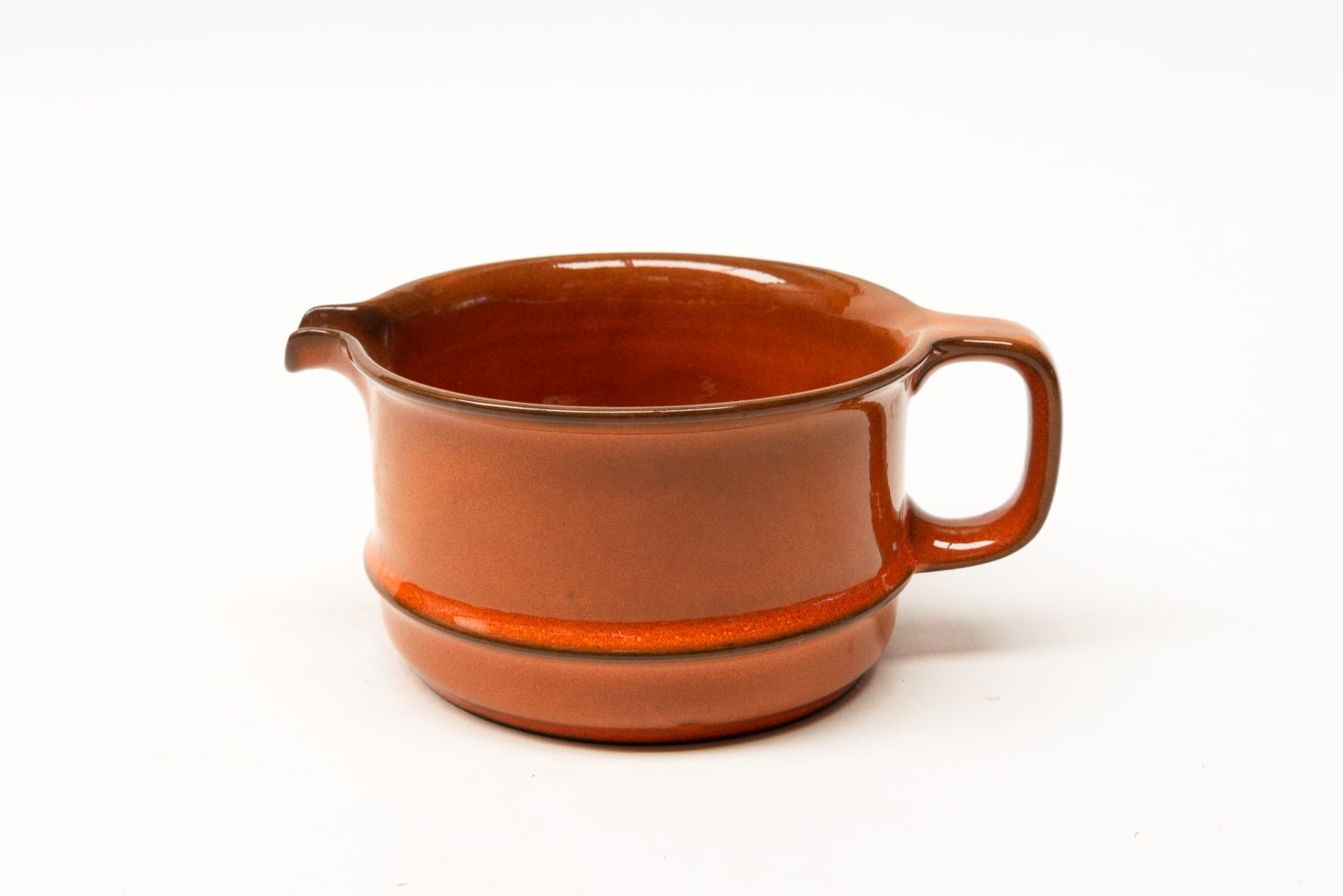 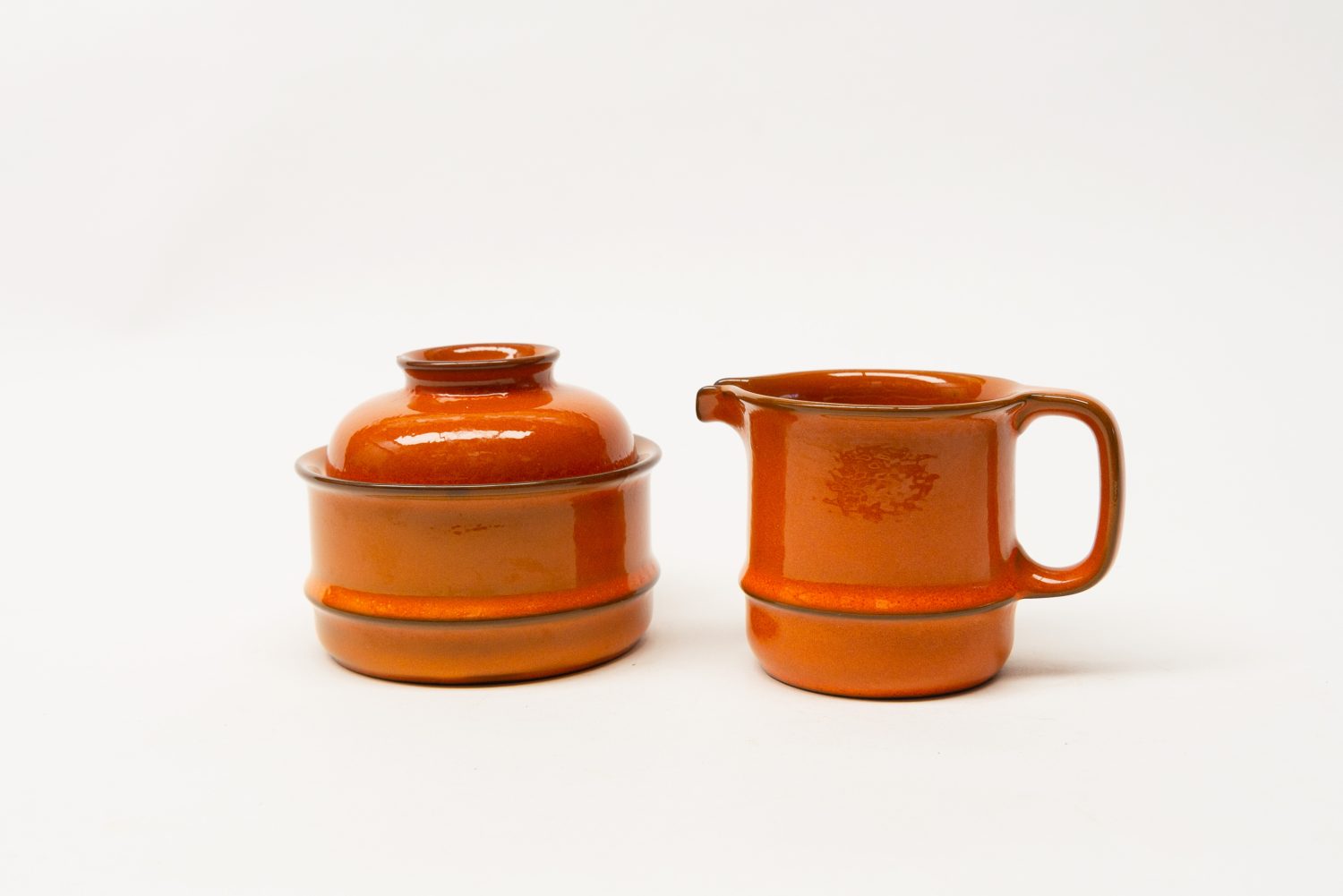 The backstamp on this series features the Hutschenreuther Lion logo and the Hartkeramik stamp.

Below, one of the bolder colour combinations on dinnerware from the same period by Renée Neue for Hutschenreuther which he is probably better known for, than for the use of a single colour on his ceramic designs.

END_OF_DOCUMENT_TOKEN_TO_BE_REPLACED

It is not well known that Eva Zeisel (1906- 2011) – more known now as an iconic America designer, in her youth was an important emerging designer in West Germany.

The very striking design in this post by Eva is called “Ceylon” and was design by her at Schramberger, and later developed further at Carstens. It appears to be now very rare.

Eva Zeisel was born Eva Stricker into a Jewish family in Budapest, where she studied painting at the Royal Academy of Art from 1923 -24 and sold some of her pottery designs at open air markets.

Around 1925 she was employed by Schramberger Majolikafabrik as in the Black Forest, as their chief designer. Here she produced over 200 designs, many of which weren’t well documented. Many of them though stayed in production long after she left Schramberger. Some of them have been reissued by MoMA in New York, the Brooklyn Museum and others.

In 1930, she moved to Berlin, where she worked  briefly for Carstens Lübeck, then for about 18 months at Carstens-Hirschau and also as an independent designer.

Eva designed several coffee and tea sets including this Ceylon for Carstens-Hirschau.

The tea service “Ceylon” was released in 1933, and produced until about 1935 with at least 4 documented patterns. The design for “Ceylon” was obviously designed earlier by Eva though, as there are a number of pieces you can find with the Schramberger Ceylon stamp like the one in this post.

I love the sugar bowl in the first image below – it looks like something of a cross between Bauhaus, Cubism and Futurism.

The influential Bauhaus and the emerging Modernist movement must have been quite an influence on Eva at the time. You will notice some subtle differences between the larger plate design (above) and the smaller plate design (below).  I would love to see what the cups and tea/coffee pots from this service looked like – but havent been able to locate any images.

Carstens-Hirschau closed production in 1956, while the Schramberg facilities closed in the late 1980s.

Some of information above has been sourced from the informative Spritzdekor website here: 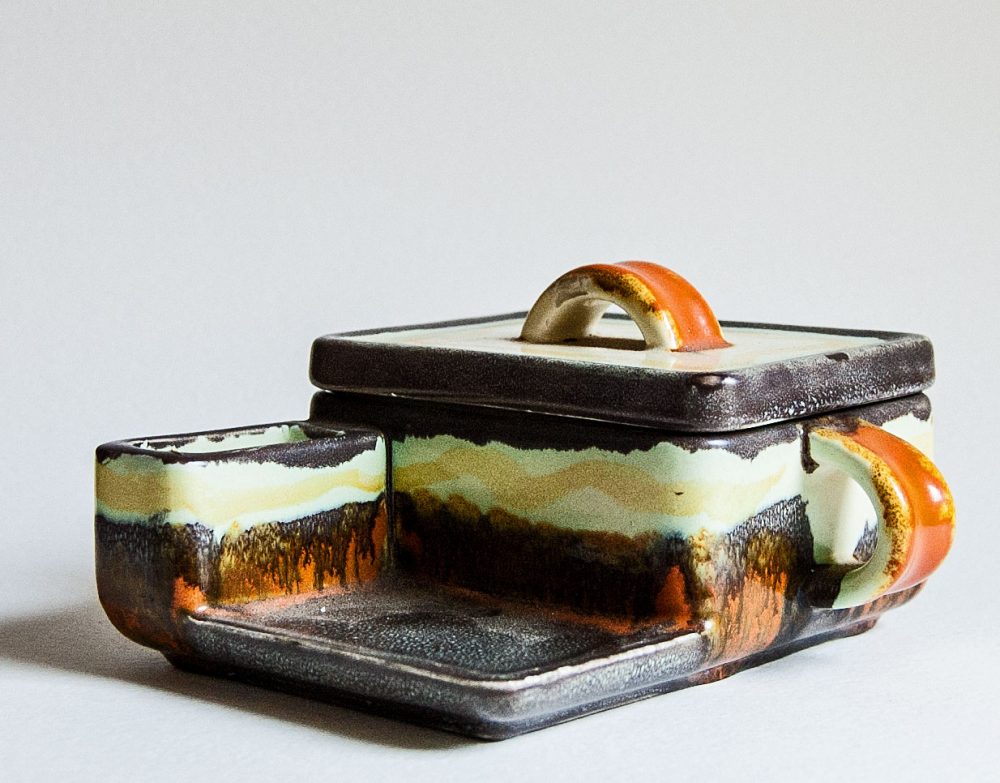 END_OF_DOCUMENT_TOKEN_TO_BE_REPLACED

Some die hard fans of West German Pottery will know that the Carstens brand was produced under license in Australia during mid 1960s by Braemore Australia…but it is not a very well known fact…and it can lead to confusion when identifying West German pottery sometimes.

Judith from the Australian Pottery 1960s to date blog has a comprehensive post full of useful information about the history of Australian pottery Braemore and its relationship with Carstens, and also with the company Haeger.

Braemore Pottery was opened in 1939 and ran until around 1985 producing pottery under its own label plus the Braemore Carstens label from the 1960s.

One of the most coveted Carstens designs was – Ankara. Designed in 1964 by Helmut Scholtis it was produced in both Germany and Australia – and is now a very sought after Carsten’s design.

German versions of the Ankara design were made using a reddish-brown clay, but a white clay was used in Australian production.

Braemore Carstens pieces are marked with an embossed B-C and the model number as in the image below. 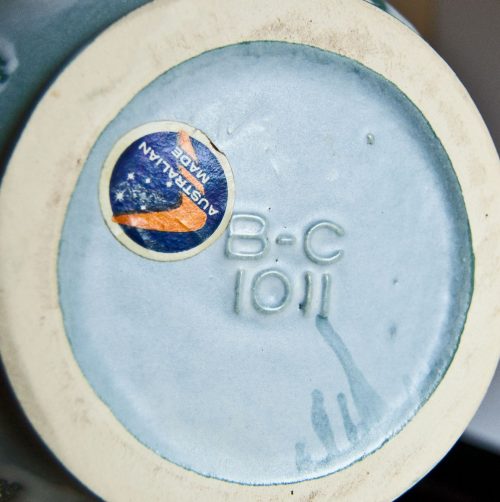 Below are some other fantastic designs I have had from the Braemore-Carstens label: END_OF_DOCUMENT_TOKEN_TO_BE_REPLACED