Posts from the ‘Joghus’ Category

Joghus was a pottery on the island of Potteries – Bornholm, Denmark. I was very excited to recently find that in the archives of the city of Roenne, Bornholm are several pages and photo archives of Joghus Pottery.

Johgus was in operation from 1944 to 1999. It was founded by Johannes Pedersen who had been working at Hjorth Pottery, who joined forces with Gustav Ottesen to create Joghus. The pottery produced a wide range of items, mainly in slipcast stoneware.

The tourist market, figurines, business merchandising, domestic wares and Christmas plates were all important parts of their production.

I was also very interested to find that in these archives are a number of photos from Joghus catalogues of various series of production from 1944-1999. It is not the entire catalogue of course – but gives a good indication of the style and look of Joghus Pottery over time.

One series which stood out to me is the one I have most often seen from Joghus – which I now have a name for. It is called “Ratonga” and features an ancient or tribal looking motif which was used on a variety of forms with a matte grey green glaze.

There are also photographs of several very attractive, modernist series from the 1950s and 1960s which I have never seen before, but am now keen to get hold of having seen the catalogue photos!  – see last 2 images. 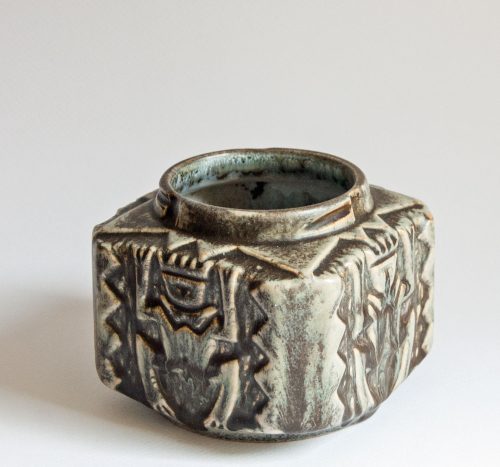 Joghus Denmark, Ratonga Jar/Canister – would have had a lid originally

Joghus Denmark, Ratonga base shot. Most pieces of Joghus appear to have this stamp and a number.