Posts from the ‘Zaccagnini’ Category

There were a number of incarnations of the Zaccagnini company, Italy. The large vase in the image below would have been made by “Urbano Zaccagnini Artistic Ceramics” which operated from 1958 to the mid 1960s.

Zaccagnini seems to have reached its peak in the 1940s and 1950s, and it is the work from this era which seems to be the most coveted (and thus expensive to buy) – you will often find beautifully simple Modernist works from this era by Zaccagnini on places like 1st Dibs.  It is a maker, however which is often easily mis-attributed if there is no makers mark – as there are so many similarities between Italian makers during this era. 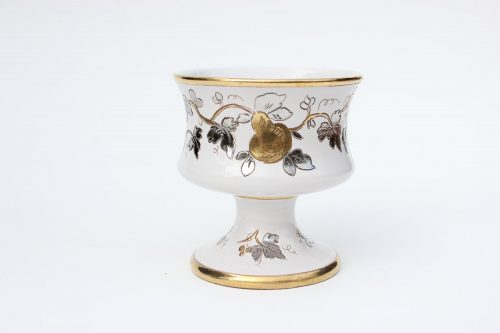 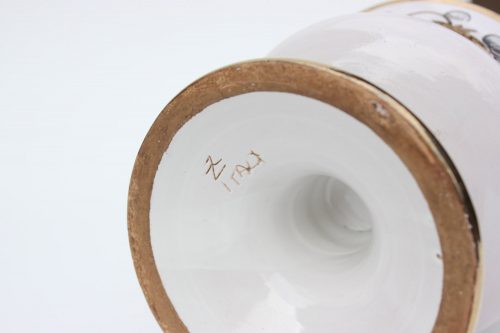 There is a brief history of this important Italian maker on THIS website which also has images of many of the backstamps and cyphers used.

Here is a (google) translation of the entry:

The ceramic factory “Ugo Zaccagnini & Figli” was founded by Ugo Zaccagnini, a former employee of “Richard-Ginori”, in Sesto Fiorentino in 1905. The first production of the company is focused on the production of majolica and earthenware type, often inspired by the ancient Della Robbia models.The company, with which the five sons of Zaccagnini Urbano, Pietro, Prisco, Adele and Enrichetta collaborate, moved to Florence in 1912 where he began a production of more volumes presenting at numerous editions of the Triennale and the Milan Trade Fair. at the Florence Crafts Exhibitions. In the 1930s the sculptor L. Contini collaborated with the manufactory.

Among the important ceramists who worked for the manufacture we also remember the sculptor Fosco Martini who, around the mid-thirties, made many interesting ceramics depicting animals and the majolica painter U. Ciardella. In 1936, after the death of the founder, the factory changed its name and became “Società Anonima Ceramiche Zaccagnini” with its headquarters in Piazza Pier Vettori 10, Florence and the role of managing director and artistic director was entrusted to the major of the heirs Urban. In the same year, thanks to the capital introduced into the company by the industrialist Aristide Loria, the company became a joint-stock company and invested in modernization and production capacity.

In 1937, more than 120 employees work in ceramics and in the factory, and the factory begins to export its products to the United States. In the second half of the Thirties the collaboration with the manufacture of numerous artists including: Mario Bandini, Ottorino Palloni, Maurizio Tempestini, Gino Pozzi and Leopold Anzengruber.At the end of the Thirties, Walt Disney entrusted “Zaccagnini S.p.A.”, which in those years was based in Piazza Pier Vettori 10 in Florence, the ceramic construction of the characters of their cartoons.

In 1950 some of the company’s ceramics, including a series of dishes, were exhibited at the Italian Crafts Exhibition at the Brooklyn Museum in New York.

In the fifties an artistic line inspired by abstractionism, called “Swedish”, was included in the production.