Posts from the ‘New Zealand’ Category

Recently while in New Zealand I was very fortunate to see an outstanding exhibition at Objectspace, Ponsonby, of the work of Elizabeth Lissaman: “The Art of Pottery”

I have never come across the work of this important Artist/Potter before, and it captivated me immediately. In addition to the unique beauty and skill of the work, was the variety and sheer scope of the exhibition.

Elizabeth Lissaman’s Pottery immediately reminded me of the work of other international potters and artists of the early 20th Century– like that of expat Australian Anne Dangar, the Artists of the Bloomsbury group in the U.K. – especially that of Vanessa Bell and Duncan Grant. I could also see similarities in the use of colour and pattern by Lissaman to the work of Danish Svend Hammershøi and other Artists at the Herman Kahler pottery.

While it is unlikely that Elizabeth Lissaman would have been exposed to the works of these Artists and Potters the common influences and inspirations of the international Arts and Crafts movement, the Art Deco Movement, Modernism, and the spirit of Individualism are all apparent – but given a unique New Zealand interpretation by Lissaman.

With a career spanning nearly 70 years, Elizabeth Lissaman is one of New Zealand’s first studio potters, who remarkably for the 1930s was able to make a living out of her work.

Elizabeth Lissaman was born in 1901 and was educated in Wellington where she was first introduced to pottery making by her art teacher DK Richmond. In 1923 she spent 10 months in Sydney furthering her own study of pottery.

She spent the next 15 years back in rural Marlborough NZ, and during the Depression years sold many art deco pieces to department stores to supplement earnings from the farm she ran with her husband, Henry Hall.

In 1937 with three young children, they moved to Horowhenua where Elizabeth also began tutoring pottery. After the war, they moved to a farm at Tahuna near Morrisville in Waikato.

Lissaman along with the female potters of her generation is now being celebrated for her focus on uniquely-inspired ceramic practice.

An unsung hero of her time, Lissaman defended her right to decorate her work as she wished, rejecting calls for the new wave of New Zealand potters to develop and adhere to a distinctively typical style. In 1969, she wrote, “We are a small nation of individualists who strive, on our own, to develop arts which satisfy something within ourselves.”

As a child of the suffrage movement, her ambition to forge her own path never wavered as she sought a successful future in pottery. Lissaman received no formal tertiary education, working alone in various parts of rural New Zealand. With a lack of locally available supplies, Lissaman sourced her materials from within New Zealand herself, digging and bagging the beautiful terracotta clay by hand.

More after the page break…..

END_OF_DOCUMENT_TOKEN_TO_BE_REPLACED

This is a piece I had some time ago and It is one of the very early pieces from Temuka Pottery New Zealand which started in the 1930s in Temuka, near Christchurch. Its nice to see that the pottery is still thriving today.

The style is classic 1930’s with its beautiful glaze runs in blue and white, with a ribbed shape on which there is some applied relief decoration in a sort of “tiki”style. This style of earthenware pottery was also very popular with Australian potteries, and generally around the world during this period. Even Michael Andersen Pottery in Denmark had a similar series of earthenware pieces.

I believe this design was by the manager of Temuka Pottery when it started up – Arthur Toplis...(although it could also be a piece from Thomas Lovatt) Arthur was a talented potter by trade, and amongst other items, he introduced the production of small items such as tobacco jars for Christmas presents for New Zealand Insulators’ customers (Temuka’s Pottery parent company at the time). Toplis died in 1939, and potter Thomas Norman Lovatt took over as manager in 1941, but many of the designs by Topliss continued for several years afterwards.

Read more about the history of this pottery on their website.

The Auckland Museum also has an interesting collection of early Temuka pieces on their website. The 2 images of the jugs below are from their collection. Have a look at the Temuka collection held by the museum HERE 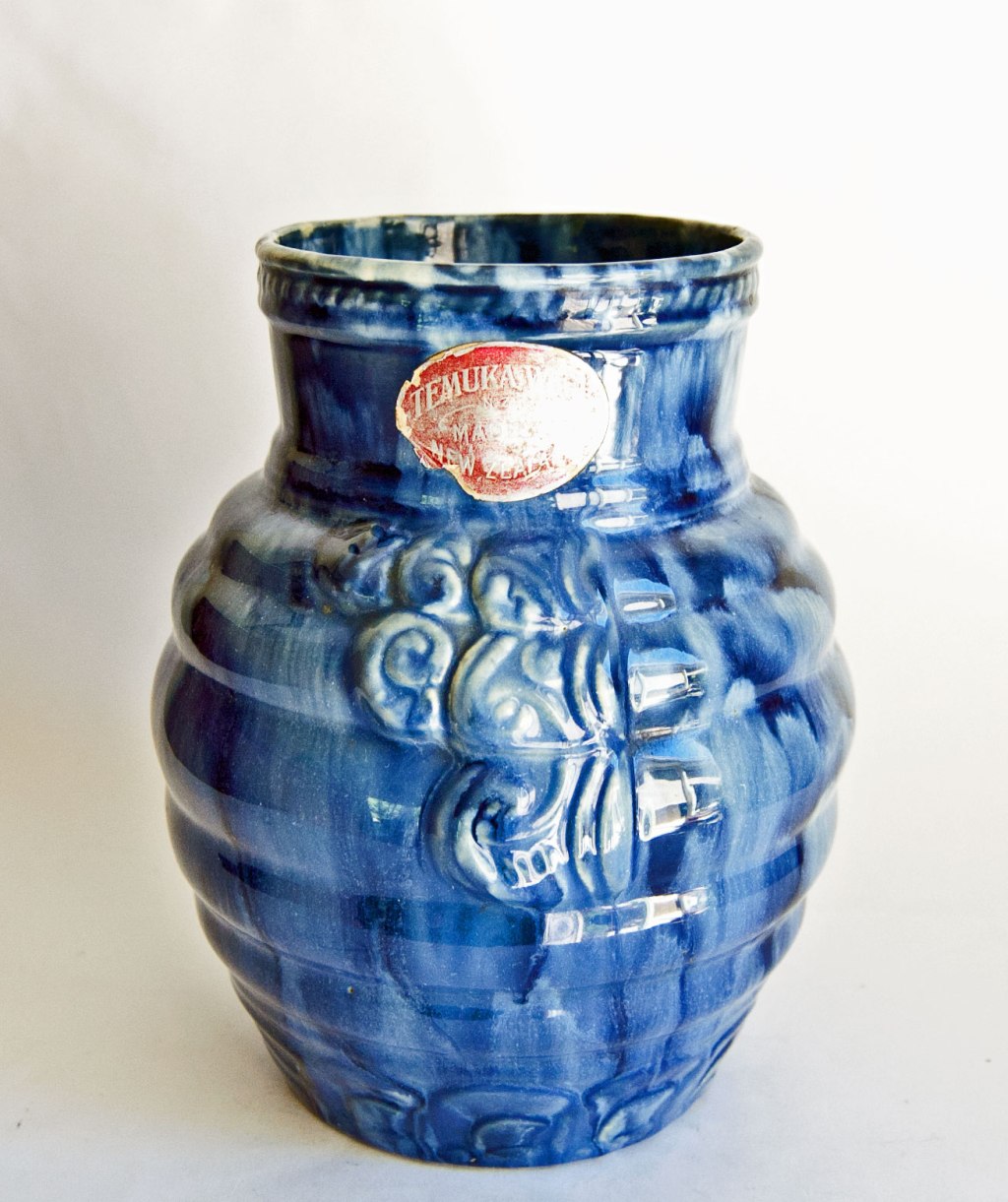 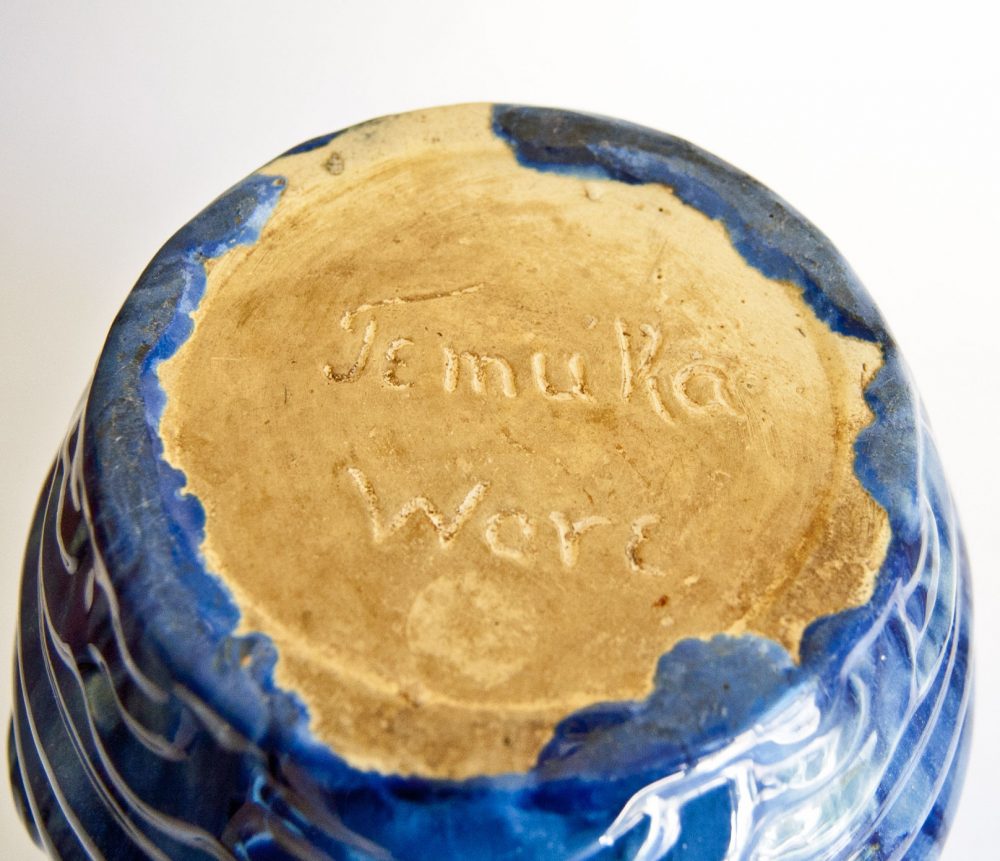