Posts from the ‘Tilgmans Sweden’ Category

Tilgman’s ceramics was a pottery just outside the city of Gothenburg Sweden, operating from c1948-1975.  In its heyday it employed about 80 staff.

It was started by Paul Harald Tilgmann (1904-1974) and in its early years was known for animal figurines, but today it is the style developed by artistic director at Tilgmans, Marian Zawadzki (1912-1978), which has come to define the “look” of Tilgman’s output. Most of this work is from the 1950s, and appears soon after Marian started with Tilgman’s in 1953 as a Polish refugee.

Marian developed a technique using a sgrafitto – of carving fine lines into the background of a design through a light coloured glaze, down to a dark grey clay slip. This created a unique textured ground which has become a style associated with Tilgman’s. The decorative elements also appear to outlined with a carved line, and then hand painted with overglazes. Birds, Fish, Flowers, Butterflies and other animals were a common theme. 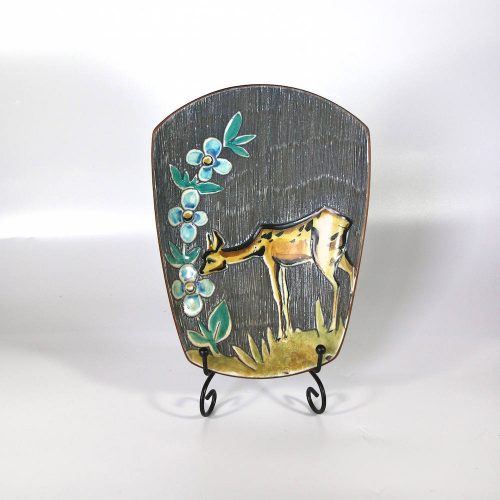 At the end of the 1960s and early 1970s, the pottery style produced at Tilgman’s was a darker and more rustic style, popular at the time in Scandinavia. The 1960s works by Marian Zawadzki from Tilgmans in this era often have bold, abstract designs – and although very different from his earlier, more delicate work, are equally as striking.  END_OF_DOCUMENT_TOKEN_TO_BE_REPLACED