Posts from the ‘Beswick’ Category

Beswick pottery operated in the U.K. from 1892 until 1969 when it was sold to Doulton, and the factory was eventually closed in 2002. Beswick is mainly known for its high quality porcelain figurines and collectables such as the Beatrix Potter characters, Disney characters, Horses and other animals.

They produced also produced some fabulous vases in the Art Deco era c1920s and 1930s, in addition to the striking modernist pieces they produced in the 1950s and 1960s including some outstanding designs by Colin Melbourne.

Recently I came across the very impressive Art Deco era vase pictured below by Beswick. It’s quite a tall piece at around 23cm and with quite lovely colours typical of their output at the time. The sweeping angular handle, streamlined form and spout with its defined ridges are typical Art Deco elements, but also have a lot in common with the “Futurist” style of the early 20th Century.

END_OF_DOCUMENT_TOKEN_TO_BE_REPLACED

The pattern “Zorba” was designed by Graham Tongue in the late 1960’s at Beswick.

It also comes in a pale Olive Green colour, but this “mission brown” colour brings out the pattern much better I think. I like the shapes of the pieces in this range too – especially the cups.

Beswick also made some other great retro designs during this period including “Apollo” and “Orbit” – All very space age retro.

Royal Doulton took over the Beswick factory in 1969 and  in 1975 Graham Tongue became the head modeller at the Beswick and added many new characters to their range of Figurines in the 1980’s.

The Beswick factory closed in 2003 and much of the Royal Doulton production was moved overseas, because it was no longer commercially viable. 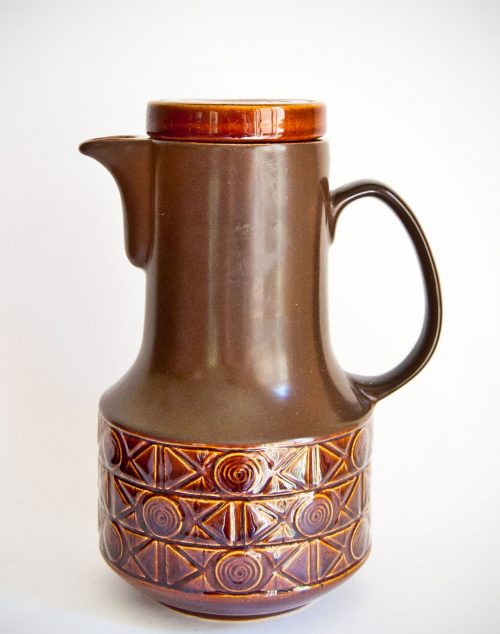