Posts from the ‘Ridgway’ Category

Gerald Benney (1930-2008) is well known as a very important 20th Century Silversmith in both the specialist and mass markets where his attractive “bark finish” became a signature style. You can read more about his work in his Obituary in the Guardian HERE.

His work in Ceramics is less known and documented – and the only confirmed record of ceramics he designed I can find is for Ridgway Potteries in 1965 when he designed the Ridgway “Ondine” series on a form which he also designed, called “Albion”.

There are some other designs which appear to be from his hand, but I am yet to confirm he is the designer.

“Ondine” hits the perfect balance between form and decoration on his very elegant modernist forms – which have a strong Scandinavian influence. Many of Benney’s designs have that Scandinavian look about them – possibly an influence from his early in career work with Norwegian designer Berger Bergersen, and the influence of Georg Jensen designs.

The pattern on his Ondine design makes me think immediately of the tines of his designs for forks – see the image below the teapot. The very smart “Albion” form on which Ondine sits also has similarities to his wonderful silverware coffee set “Elizabeth II” (also pictured below) – specifically the form of the handle and the spout. The “flat” lid and generous handle shape is something he used often on his silverware designs.

I love the simplicity of the Ondine design which is at the same time very sophisticated and elegant – alternating blue and green panels, outlined with a black maze like pattern, wrapped perfectly around the form on which it sits.

The V&A Museum in its online collections has some fabulous examples of Benney’s work, including a fascinating design for a silver coffee pot design very similar in shape to the teapot design pictured here. They also outline how Benney’s now iconic “tree bark” finish was developed:

“His signature textured tree-bark finish was developed by accident. While hand-raising the bowl of a cup he unintentionally used a silver hammer with a damaged head. After hitting the smooth surface of the silver several times with the hammer he created a pleasing ribbed and rippled surface that resembled the bark of a tree. As well as being aesthetically pleasing this textured surface also had a practical advantage; it prevented fingermarks and tarnishing” 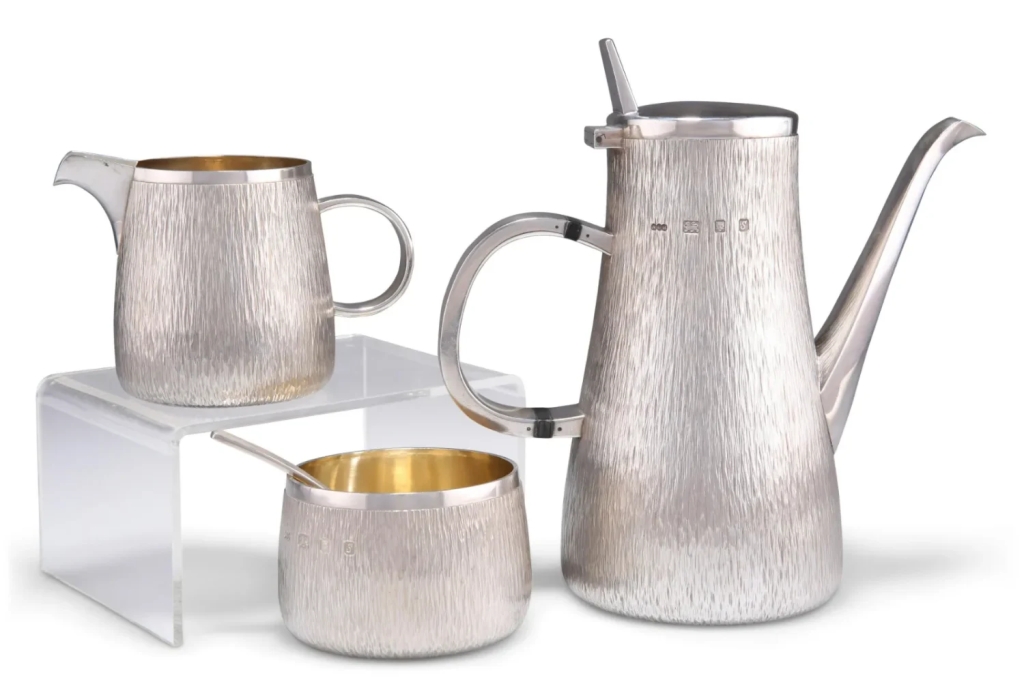 I’ve never come across a dinnerware set quite like this one before – consisting of 2 very different styles and production techniques.

The maker is RIDGWAY (Staffordshire).  The cups and bowls are hand thrown from a terracotta clay and glazed in a dark olive green matt glaze – A great shape too – they are wide at the bottom and narrower at the top.

They’re really quite chunky – and you would think they were handmade by a studio potter – except for the stamp on the bottom.

In almost complete contrast is the bone china plate-ware designed for this setting. It is bone china, with hand-painted greens and blues  – but when its all together – the design simply works, with the green hues of the plate ware tying it all together. I think it is a fascinating experiment in tying together traditional plate ware design, with the developing “hand made” movement of the late 1960s.

The pattern is “ROMANY”. (not to be confused with Denby Romany and many other makers who used this name during the 1960’s)

The backstamp is from the 1960’s. Ridgway were quite a large group of Staffordshire Potteries produced  many brands including – Colclough, Paladin, Portland, Adderley and Gainsborough potteries. 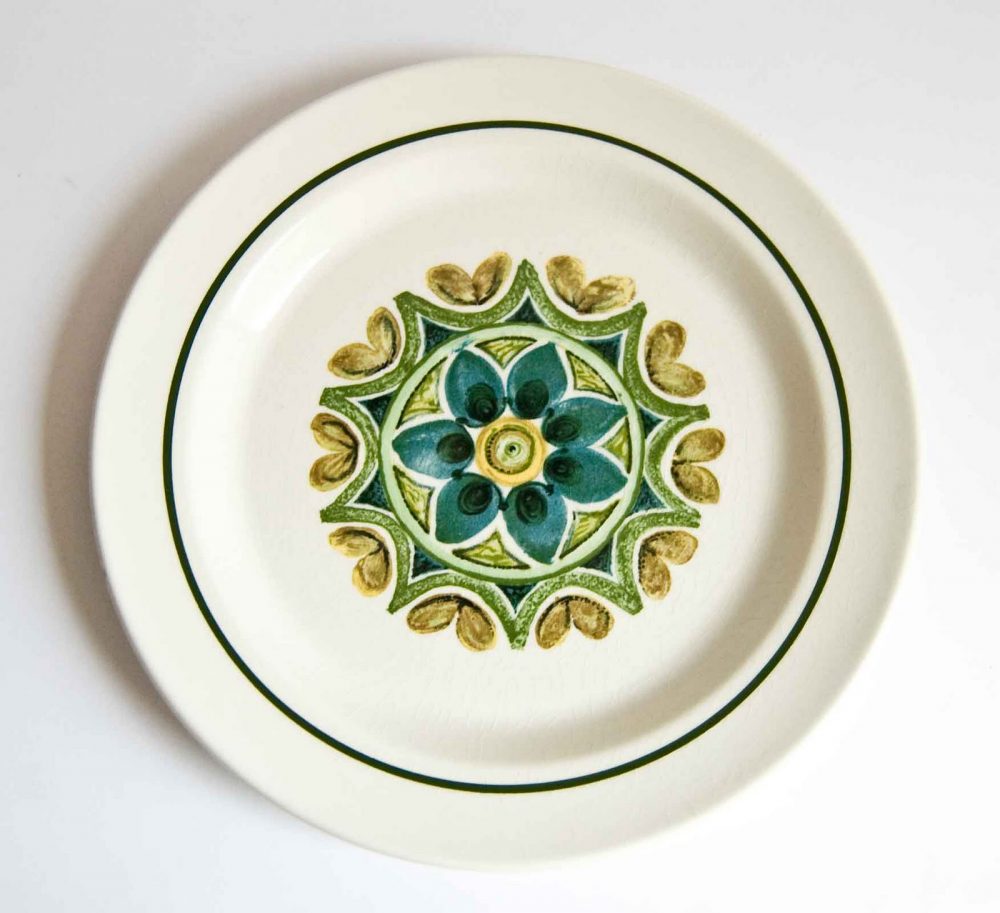 Homemaker was designed in 1957 by Enid Seeny and Tom Arnold for Ridgway and was sold through Woolworth's. It had a long production run and was still made as late as 1968 such was its popularity.