Posts from the ‘Desiree’ Category

The Danish ceramics company Desiree was located in the small town of Benlose in central Zealand, Denmark.

It began in 1964 under the direction of H.C. Torbol, who had been production manager at Bing & Grondahl for many years. Torbol’s son Knud and his Artist wife Lis took over the company in 1975.

Desiree’s production consisted of mainly stoneware utility items (dinnerware) and lamps. They are also known for their range of quality blue and white Mothers Day and Christmas plates in blue and white in the Danish tradition.

The factory closed around the year 2001 but still maintains a website HERE which showcases their designs, with some other good information on the “frames” (shapes) produced in each setting etc.

The design “Thule” by Desiree is their stand out design, and still very popular – although hard to get outside of Denmark.  It went into production in the late sixties and I believe continued in some capacity until the factory closed. It is a very well known design in Denmark, but not as well known outside Denmark as for example the designs like “Cordial” or “Azur” by Jens Quistgaard are known. 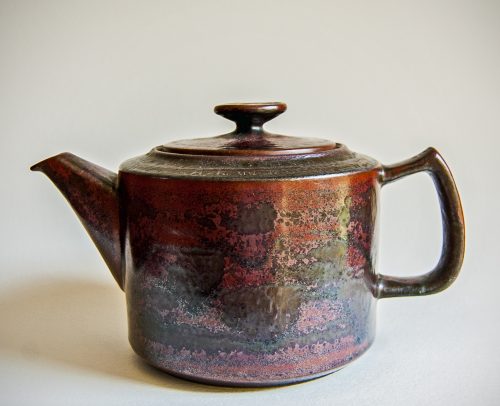 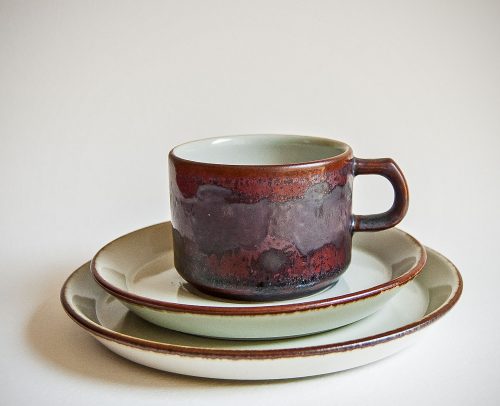 I think “Thule” is up there with the best of Danish dinnerware designs of this era. I think of it as a “Danish Modern” classic. The deep iron saturated glaze is quite unique, and compliments the greens of the pattern so well.

The forms and shapes of the dinnerware are also outstanding examples of great design. It is incredibly tough and durable – without being “noisy” as many stoneware dinner services can be when in use.

I love the variations in the iron saturated glaze, which at first glance  might look rough to the touch – but is actually very smooth. The whole design to me shows very high levels of technical mastery with glazing, manufacture, and concept development.