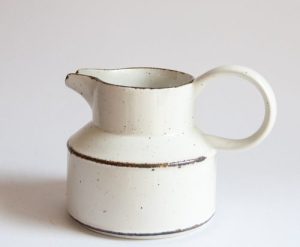 Midwinter Stonehenge is one of the standout British designs of the 1970s. The series was created by Eve Midwinter c1972 who had previously worked at the Portmeirion factory. The look of Stonehenge was revolutionary and so much of its time.

The Stonehenge shape is typified by its studio like geometric forms, bold curved handles and the very tactile rounded lids and knobs. The designs and colours in Stonehenge typify the “back to nature” design ethos of 1970s in the same way as does Arabia Finland’s Ruska.

“Creation” was the first design of the Stonehenge series – an light cream coloured gloss base glaze, flecked with iron oxide and rustic iron saturated edges. It became popular instantly, and at the height of its popularity 5 tons of glaze was being used each week to keep up with demand. It was exported world wide – and you will sometimes find different names used for the U.S. market.

The Stonehenge designs of “Sun”, “Moon”, and “Earth” soon followed after “Creation” and all became equally as popular. These designs which were all based on “creation” were in production until 1982, and “Sun” even longer. The pieces could be mixed and matched – adding to their appeal.  A variation of the design “Wild Oats” by Eve Midwinter also became a very high selling pattern. These 5 patterns from the “Creation” series are the ones you now see most often on the secondary market, and are now being discovered by a whole new generation.

The very last pattern of the Stonehenge series was “Nasturtium” (designed by Jessie Tait) with very vivid colours – but was later withdrawn around 1982 because of legislation on cadmium in blazes.

The designs mentioned above are only a small fraction of what was produced though – as there are at least 55 known designs using the Stonehenge shape!

Note: The “Stonehenge” shape or form was also used on some patterns without the iron flecks in the glaze – one group of patterns had matte coloured glazes and the other a glossy white glaze, but generally when someone is referring to “Midwinter Stonehenge” today – it is the iron flecked designs which are most well known and remembered.

If you are interested in any Midwinter Pottery, essential reading is the book where the above information is drawn from: