Denby Arabesque design by Gill Pemberton would have to be one of the 20th Centuries greatest dinnerware designs. Unlike many other dinnerware and production designs of this era and later Gill actually designed all the forms and the patterns – including the ergonomics of the handles and such.

Originally Arabesque started as a small set of gift ware designed by Gill Pemberton – with the same stylish and ergonomically correct handles as those on Chevron. A trip to Russia with her husband in 1962 inspired the idea for the red and golden hand painted decoration which she developed further. The design for Arabesque was bound to become a cultural icon of the 1960’s and 1970’s.

The Arabesque range was in production only 12 months after the Chevron range had started and continued in production for almost 20 years.

Despite its very high volumes, and appeal to the mass market – each piece was still hand painted until the mid 1970’s onto the unfired glaze when the sheer volume meant production methods needed to change and decals were then used.

The following is from Gill Pemberton herself to correct some common errors she reads about her 2 most iconic designs:

“Both Chevron and Arabesque were mostly hand thrown and turned , only later some smaller pieces were semi machine made . And no, the design on Arabesque  is not  enamel. The medallions on Arabesque were hand painted raw unfired glaze onto raw glaze. Later , as the design became so popular, the smaller items – most used pieces like cups & plates, the decoration was applied on fired glazed ware as a decal “ 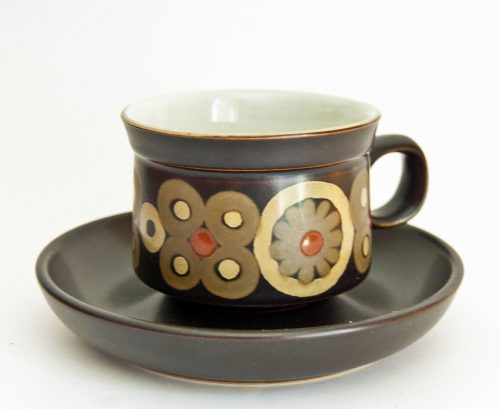 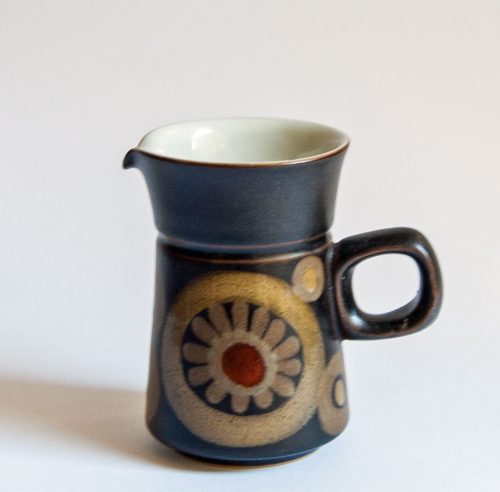 Gill thought carefully about every component in this series and even modelled all the handles spouts, to maintain consitency. The range was originally named Samarkand (which it continued to be in the U.S) but this had to be changed when at the same time Portmerion pottery produced a range by the same name.

The side handle design on Arabesque pieces is a further – slightly more organic
development of the side handle on Chevron pieces, all designed by Gill.

I really like the white satin glaze interiors of the cups, jugs and some of the other vessels – probably because it contrasts so well with the dark pattern – and highlights the design even more.

The design of all the plate sizes features this layout of the design. The chop plate (the largest of the plates was rimless -causing a few production headaches)

I continue to come across pieces that are hard to find – like the butter dish, and below that a set of ramekins in their original teak tray – (Photo provided by Martin in Canberra) 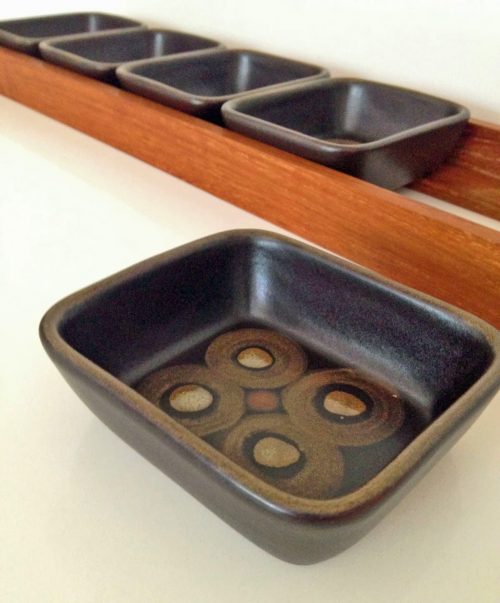 Arabesque continues to sell well on the secondary market, and is still popular and highly collectable, and relatively inexpensive. Its survival says a lot about its durability – like all Denby ware. 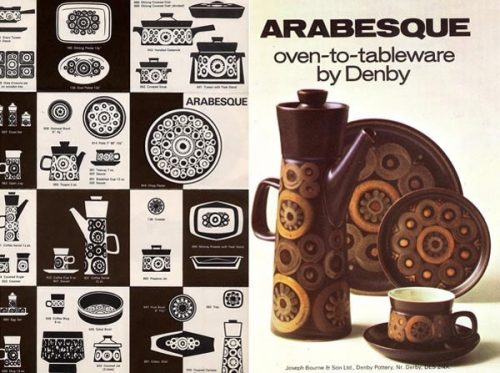 There were 2 later re-incarnations of Arabesque forms with white glaze varations – Summit and Kimberley c1970: