Lyngby Porcelain opened in 1936 in Lyngby, a picturesque town just north of Copenhagen, Denmark. Neils Holst and Christian Knudsen were its original founders, and it was a major supplier of dinnerware to the Danish market from the 1950s until its closure in 1969, after which it was demolished.

At its peak it had over 500 workers -which gives us an idea of the volume of work that they must have produced. Axel Bruel worked there as a designer at its peak as well, and is often (wrongly) attributed as the designer of all patterns. The most iconic series of dinnerware to come out of the Lyngby factory was a series called Danild, consisting of 10 different patterns by different designers.

My favourite is probably Danild 64 – more commonly known as “Tangent”.

What a stunning, crisp and effective design. It’s designer was Bent Severin who designed it for Lyngby in 1963.

Bent Severin (1925-2012) was a well known Danish Architect, who is best known for having designed several hotels in Denmark including Hotel Hesselet, Nyborg(1967), Hotel Kongens Ege in Randers (1967), the interior refurbishment of the Hotel Kong Frederik in Copenhagen (1968) and Radisson SAS Scandinavia Hotel (together with Ejner Graae , 1971-1973). 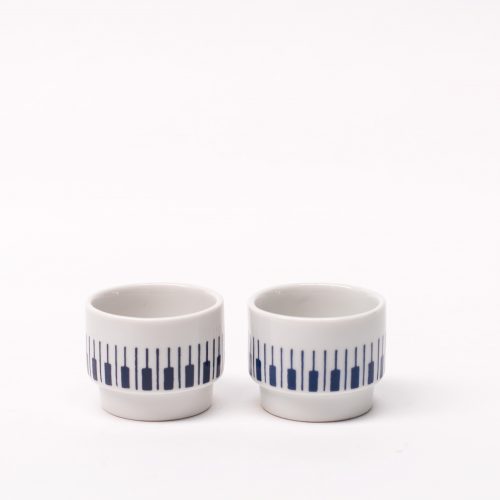 Bent also designed glass series for Holmegaard . As you might notice, the Tangent design is based on the pattern of piano keys. Breathtaking and highly effective simplicity.

You might find either of the backstamps below on Lyngby Porcelain of this era:

In 2012 Lyngby was re-born and has since re-released some of the earlier designs – like their classic and collectable ribbed vases, and now works with contemporary designers adding a new chapter in the history of this Danish icon.