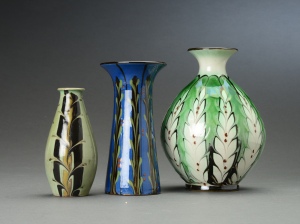 The first few images below are of one of the most impressive and beautiful mid century pieces I have ever had from Kahler Pottery, commonly known as HAK (Herman A Kahler), Denmark. It is a huge stoneware bowl by any standards, with the most intense and luxurious shade of 1960s turquoise (35cm in diameter x 10cm high x 2.92kg)

It is signed underneath with the HAK Kahler mark and “Nils”- for its designer Nils Kahler.

Kahler Pottery in Denmark began circa 1840 and operated continuously until its closure in 1974. All pieces of Kahler Ceramics from this period have the HAK logo hand-signed, and often a a set of numbers (the pattern and shape number as per standard practice).

Nils Kahler (1906-1979) was 4th generation Kahler and in 1940 together with his brother ran the workshop. Nils was the artistic director and his pieces were all signed ‘Nils’ to the underside of the base. The brothers went their separate ways in 1968 and the family pottery closed in 1974 (although the HAK brand name has now been revived and rebranded, selling beautifully designed and made ceramics, including some of the historical forms from the original Kahler output – see their website here )

The marking of ‘Nils’ to the underside of pieces ceased in 1968. This piece dates sometime close to 1968 I believe.

The colour of this piece – the deep turquoise blue along with the herringbone pattern was a signature design of Nils Kahler, and one of the most coveted series of his designs.

Below: 2 more pieces in the same style from the 1960s, by Nils Kahler

Of course the pieces above, and the modernist style they represent are only a tiny part of the HAK output. HAK are equally well known and collected for their superb early 20th century designs – especially those with bold slip trailed and feathered designs such as the examples below from a Lauritz Auction sale in 2016.

Kähler Keramiske Fabrik was established back in 1839, when potter Herman Kähler opened a workshop for tiled stoves and kitchenware at Kählers Bakken in Næstved, Denmark. But this is not the Herman Kähler whom today we associate with Kähler and who made the factory famous. This rather is his son Herman A. Kähler, who lends his name to the signature on the underside of the products……

Another interesting series of pieces from the HAK Kahler pottery are the striking abstract pin dishes as pictured below. The designs of these small dishes is not the refined, typically Scandinavian style you normally associate with this maker.

They are generally around 10cm in diameter – slightly larger than a “pin” dish. Sometimes the designs are simply glaze splashes or splatters like on this piece, and sometimes they have more developed hand painted designs. They make attractive group displays if you manage to get hold of a few.

No two appear to have the same design, and they all appear to have been made as one-offs – perhaps for sale to visitors in the Kahler pottery shop when the pottery was running in Næstved until its closure. Some appear to date from the early 20th Century, with Art Deco influences and others appear to be made in the 1960s with Modernist and Abstract influences.

You can read a more comprehensive history of this iconic pottery on the new Kahler website HERE,