After 80+ years Royal Doulton Rosslyn is still a very popular design in Australia.  It is probably because it was so popular in its period – (designed in 1933 but produced for years) as a wedding gift – that many people grew up with either their mother or grandmother having at least a few pieces of the set, if not the whole thing. In this era dinner sets were huge, and usually consisted of over 100 pieces.

What I like about the Rosslyn pattern is its Art Deco look with the stylised floral motif combined which is combined with black line work on a cream coloured glaze. The floral design isn’t over fussy, and has an almost Japanese quality about it.

The black line work also reminds me of the Architecture of that period too and of the Californian Bungalow style (1920-1939) with its black timber work staining in each room (“Japaning” as it was called).

There was also a version of this which instead of the black outline, had an orange outline – but to me that version does not work. The orange line looks lost on the design, which loses its impact because of it.

Below are some images of pieces in this design which have passed through my hands. 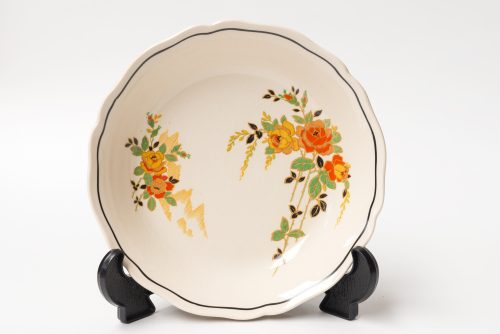