Some of the most striking and bold abstract patterns on ceramics in the 1960s and 1970s came from Poole Pottery in the U.K. Two important series from Poole during this era were the Delphis and Agean series.

There is a lot of information about these now iconic and very collectable series online and in books.

The name Delphis has become associated with the standard range of shapes and designs produced by the new Craft Section at Poole Pottery which was opened in May 1966. The range was a natural progression from the earlier ‘Delphis Collection’ of studio pottery in standardised shapes which launched in October 1963. New glazes were introduced following a visit by Guy Sydenham and Tony Morris to the Vallauris factory in France in 1966. These were more reliable (and probably safer) than those previously available. Production employed a team of paintresses under the initial guidance of Tony Morris. The bold designs and colourful glazes were instantly in tune with 1960’s fashion and such was the popularity of the range that the factory struggled to keep pace with demand.

The Delphis series consisted of about 75 shapes. The shapes were standardised – but the colour, decoration, glazing of each piece was unique – enabling a large pottery to produce work with a hand crafted look, but on a commercial scale. The designs were marketed as “irreproducible”. The Delphis series became Poole’s best selling series, and continued until its withdrawal in 1980.

What stands out about the Delphis series as a whole is the use of very bold, bright colours and abstract, hand painted patterns. There is frequent use of bright red, orange, and yellow – with the use of black to delineate the patterns and make the designs “pop”.

The piece below is shape 88 and signed by Christine Tate, who was a section supervisor for the Delphis range from 1966-1970. Most pieces of Delphis are signed the the artist/painter, but you will find some from the series that are not signed, but just have the Poole backstamp, and usually the shape number.

“To encourage this experimentation and creativity during the early years, each decorator would be given a few hours a week to produce their own work, be it models, tile panels, any artistic output they wanted.  However, Delphis became such a commercial success that demand began to encroach on these creative freedoms with over time been introduced and later with the painters terms of work  changed in 1972 from an hourly rate to piece work”

Below, some more of the fantastic Poole Delphis pieces I have or have had in my possession: 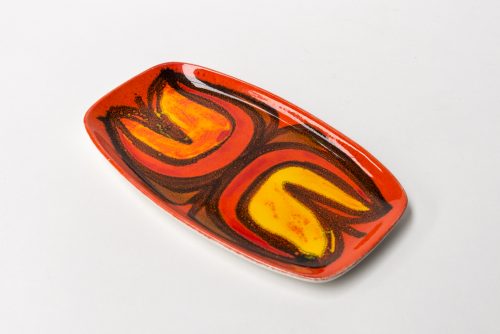 Below is a piece in a subset all of its own from Delphis – that of carved bowls and vases. This is one of my favourite designs, by Christine Tait.

Will Farmer’s book “Poole Pottery ” (ISBN 978-0-74780-835-0) has a lot of valuable information on Poole pottery, including the Delphis and Aegean series – and from his book is an excerpt about the “Aegean” series.

Developed in 1969, the Aegean range featured 5 distinct decorative techniques – silhouette, sgrafitto, mosaic, flow line and carved. The various techniques were both inventive and technically accomplished with superb use of modern glazes and production methods . Initially developed by Leslie Elsden as a replacement for the Delphis  range it features abstract, landscape, marine and animal subjects in a darker palette over a range of 22 standard shapes. It was never as popular as Delphis but ran as a complementary rather than a replacement range until 1980.

The Aegean series can be confused with the Delphis series, but once you have seen a few pieces you will start to notice the difference between the two – mainly in the use of more muted colours and less “freeform” patterns. 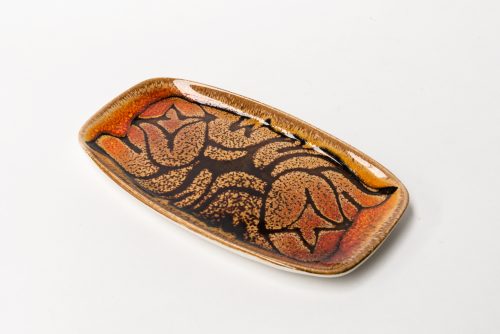