Until recently I had thought that the well known Arabia Finland “Kaarna” design was by Ulla Procope (1921-1968). However, more research recently has made me question this. The Finnish websites “laatutavara” and “dishwareheaven” both attribute the design to Goran Back, as do a number of other sources. Unfortunately the authoritative book “Arabia” by Design Museo Finland doesn’t list the design.

To throw confusion into the mix, another design “Mahonki” is often confused with Kaarna.

One thing is clear though – Mahonki and Kaarna all have the same forms or models which are known to be designed by Goran Back.

The form is referred to as the “GD3” series of forms

Mahonki is most often referred to as being a design by Ulla Procope – but this refers to the design of glaze colour and style, not the form.

To complicate the background of these designs, Ulla Procope died in 1968 at about the same time these designs were being released, so the probability is that both Kaarna and Mahonki were collaborative works – which may have been completed after Ulla’s early death.

Regardless of who designed what, it shows how the application of a colour or glaze to a form can completely transform it’s appearance.

Kaarna is a Finnish noun for Bark (tree) – and seems to be a reference to the ribbed texture on this design – more obvious in the matte brown glaze. There is also a white variation of Kaarna. The white glaze has a more contemporary and timeless look about it.

Mahonki  means “mahogany” in Finnish, and when you see a piece like the teapot pictured below it certainly has a rich mahogany look about it. 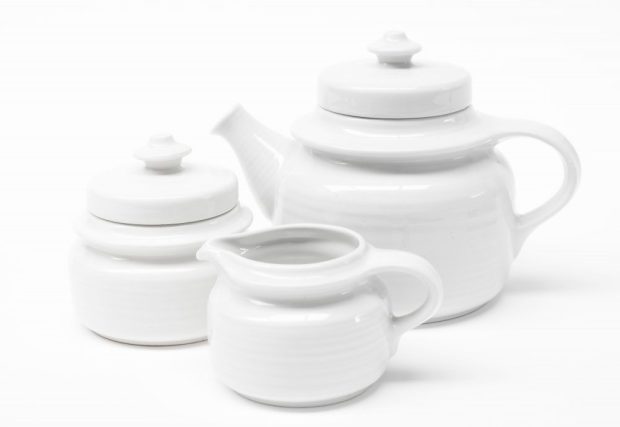