Portmeirion “Totem” –  Was originally launched in 1963. It propelled Portmerion pottery into stardom and is now considered to be a design icon of the 1960s. It was designed by Susan Williams-Ellis (1918-2007) the owner of the pottery.

Like Denby Chevron and Arabesque by Gill Pemberton for Denby at the same time, it was a revolutionary design and created a sensation, as there was nothing else like it.

Additionally, in an era when the concept of a “working woman” was looked upon with suspicion, in Britain at least – the success of Susan Williams-Ellis as a designer, businesswoman, as well as wife and mother was extraordinary. 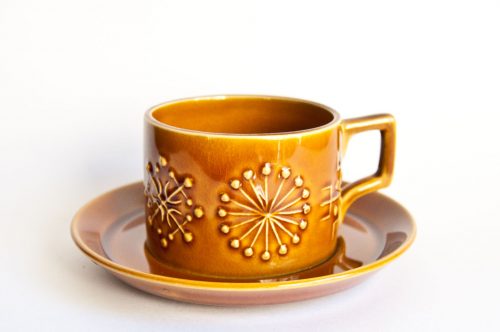 “Totem,” was successful into the seventies, and the motifs on the ware are the most copied of all design motifs of that period. I think there is something quintessentially Celtic or English Tribal about the design, but at the same time it has visual references to symbols of the atomic age, space exploration and satellites.

Totem had a striking cylindrical shape and beautifully textured surface, featuring stars and spirals, making you just want to touch it. These designs were carved directly into the moulds by Susan. It was originally made in 3 colours – blue, amber and dark green. The translucent flow glaze accentuated the relief pattern. White was introduced at a later date.

The idea for the shapes of the range was a practical one. When Susan and her husband had bought the pottery a few years earlier, it had been Kirkham’s Pottery. In the factory there were a large number of cylindrical moulds that had been used for making medical, pharmacological and laboratory vessels. Susan put them to creative use in designing the Totem range.

In photos of Totem pieces I have had, you can see the beautiful transparency of the glaze. However because of the type of glaze it is hard today to find a piece that doesn’t have crazing.

A bit of relevant background biography on Susan, from her Wikipedia entry:

Williams-Ellis was born in Guildford, Surrey, England, in the house of artist and critic Roger Fry. Her father, Sir Clough, was an eminent architect; Williams-Ellis’ mother was writer Amabel Strachey, cousin of author and Bloomsbury figure Lytton Strachey. Her parents were friends of other members of the Bloomsbury Group, including Augustus John and Virginia Woolf. Williams-Ellis’ godfather was Rudyard Kipling.

She was determined to be an artist from an early age. In the 1930s, Susan studied ceramics with Bernard and David Leach while she was at Dartington Hall School. At Chelsea School of Art, during the 1940s, her tutors included Graham Sutherland for painting and Henry Moore for sculpture, who helped to develop Susan’s innate feeling for three-dimensional shape and form.