From 1966 to 1980 she worked for the Wedgwood group, starting there in her mid sixties at a time when most might think of retirement. This era proved to be the most productive and exciting period of her career. Her life long aim with ceramic design was to bring high quality, affordable and contemporary design to the younger consumer – and she certainly achieved this in her time at Wedgwood with dozens of outstanding designs.

In 1968 she had around 30 designs in production – including some which she had bought with her to Wedgwood (Glen Mist and Black Fruits).

She also bought to Wedgwood her “Can” shape developed in 1958,  which was the frame for many designs at Wedgwood.

This “Can” shape is used on some of my favourite designs Susie created in the late 1960s for Wedgwood, including a series of “Psychedelic”, “Space Age” or “Op Art” designs inspired by the space age, Carnaby Street, Kings Road London, and the “Swinging Sixties” with all its bright bold colour and pattern. She captured the essence of the sixties London style in these striking designs which were released from around 1967.

They included Heraldry, Carnaby Daisy, Harlequinade, Nebula, Diablo and Pennant. All of these designs were available in Harlequin sets (mixed colour-ways). All of them are quite hard to get hold of these days – and well worth purchasing if you come across them. 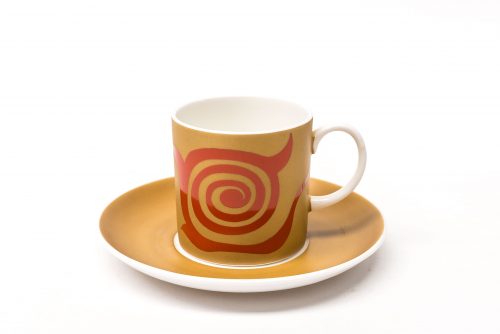 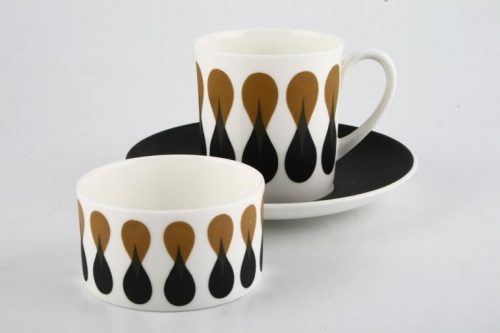 If you want to find out more about Susie Cooper online, there is a comprehensive and well researched Susie Cooper Website HERE

Research for this post came from the book “Susie Cooper – A pioneer of modern design” – Andrew Casey, Ann Eatwell, 2002 – A valuable and comprehensive resource for anyone wanting to know more about the work of Susie Cooper.

There is also this very interesting YouTube video by the Wedgwood Museum on Susie Cooper: