This beautiful handmade stoneware vase is from L. Hjorth, Bornholm, Denmark. I love the colour and texture of the glaze, in addition to the form and level of craftsmanship the piece displays.

The glaze indicates a studio piece from the 1960’s or 1970’s with its blue mottled appearance. It was a glaze which was very popular in this era with many manufacturers and potters.

The urn is stamped only with the L.Hjorth stamp, and does not have the reindeer mark – the lack of which would normally indicate that this was produced pre 1927 – but there are exceptions to this rule, and you can find pieces made in the 1960s and 1970s which have no reindeer stamp.

Looking through the old Hjorth catalogues online however, I think I have found the series this piece was copied from in the 1916 catalogue, the title of which translates as “copies of Bornholm excavations”. Copies from which era I’m not sure, as Bornholm has been occupied since pre-historic times by several races/tribes of peoples. The form of this piece has a very Roman Empire look to it though.

Apparently the original pieces made in 1916 as copies of the Bornholm excavations had little in the way of glaze or decoration either – and were a reddish brown, or natural clay colour.

Whatever the story – A fascinating link to history through a beautifully made piece of early 20th Century pottery. The beauty of Danish pottery never ceases to astound me. 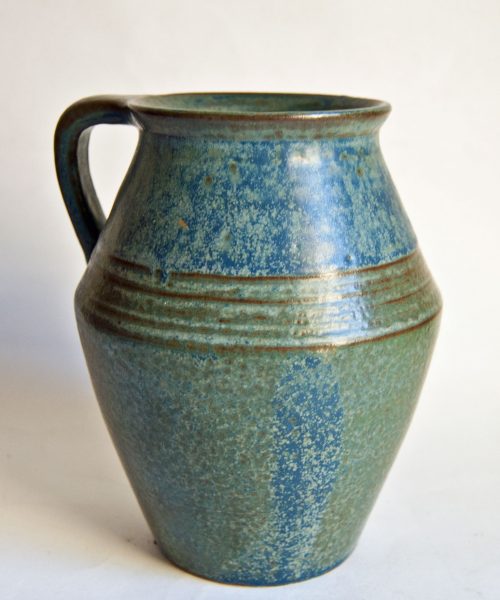