Bjorn Wiinblad was a Danish painter, designer and ceramicist who worked in a wide variety of media including painting, set design, fabric design, and illustration. To most of us however he is known as one of the superstar ceramic designers of the 20th Century.

What attracts me to his work is Wiinblad’s skilful use of expressive line and colour, combined with the whimsical nature of his work which always makes you smile.  Wiinblad’s work is unlike any other. His style of expression is highly personal, and has a touch of the oriental and exotic about it.  It is hard to think of another illustrator or ceramic designer who comes close to Wiinblad in either quality, originality or output.

Early in his career Wiinblad worked mainly in graphics and illustration, but the turning point came when he got the opportunity to work more on his own ceramics in the studio of ceramicist Lars Syberg in Tastrup near Copenhagen. He held his first public exhibition in 1945 – the exhibition was quite a mixed bag of ceramics, portraits, and children’s books – including a complete illustrated edition of “Aladdin”.  This exhibition proved to be the jumping point for his career, as through it he became known to Jacob Bang who had just been promoted to the position of Art Director of Nymolle Pottery, and eventuated with Wiinblad starting work with Nymolle in 1946.

At Nymolle Wiinblad produced exquisite and highly detailed pen and ink drawings which were printed onto a wide range of pottery items – usually in just one colour – with Black, Red and Blue being the most commonly used.

Wiinblad described his work with Nymolle as his “bread and butter” work, (due to its quantity and immense popularity) and he eventually became the owner of the pottery until it ceased operations in the 1990’s. (He also bought the well known Knabstrup pottery in 1977 and absorbed it into Nymolle)

One of the most often seen and traded works from Wiinblad’s time at Nymolle is the “Calendar series” of wall discs or plaques from the late 1950’s.  They tell the story of the courtship and growing love of a couple who meet in January and fall in love. Each month tells us part of their story over a year, ending in a child being born in December.

Below is the first of the series of calendar plaques, starting with January or “Contact”.

Bjorn Wiinblad, “January – Contact”. The first month in the 12 Calendar series of plaques.

But there is so much more to Wiinblad’s work at Nymolle than this series. Below are just some of the fine examples of Wiinblad I’ve had from Nymolle.

This platter called “Paloma” shows wonderfully the character and charm Wiinblad was able to create with his drawings. 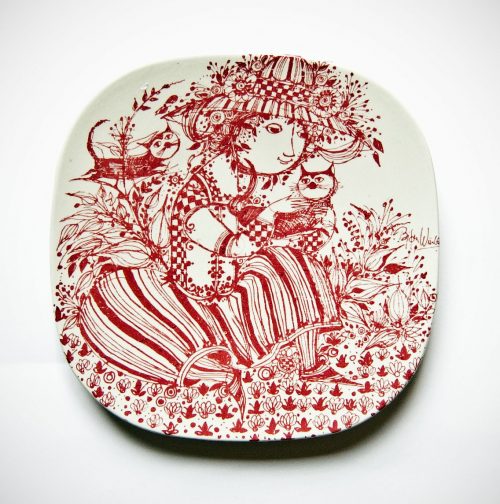