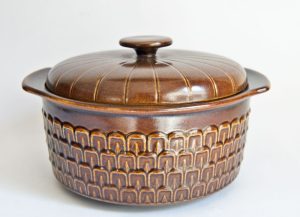 Wedgwood Pennine was a hugely popular oven-to-tableware dinner service in the 1960s and 1970s.

It has that very English “country rustic” look and feel about it – but unlike much other British dinnerware of the era was very tough and durable, and can still be found quite easily in excellent condition. 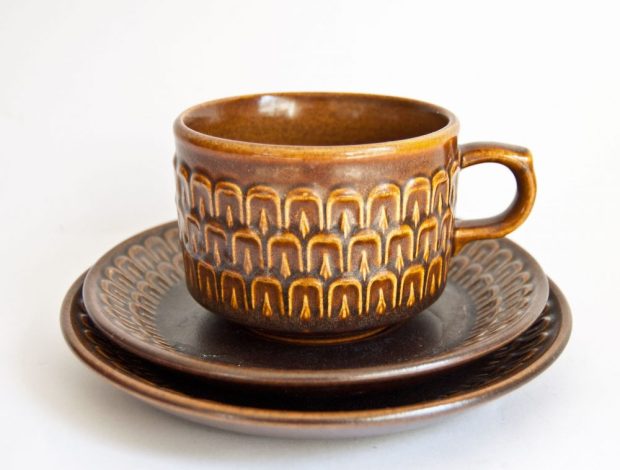 On the excellent Wedgwood Museum website I found the following history of the design….

“A prototype ‘oven-to-tableware’ had been evolved by the eighteenth century. Referred to as ‘game pie dishes’ such pie crust ware was not at all durable. It was not until well into the twentieth century that a true oven-to-tableware was evolved, thanks to technological advancements within the ceramic industry. The main development took place in the 1960s, with the Pennine range first appearing in 1965. The range of forms comprising the ware were designed and modelled by Eric Owen, with the shape actually being known as Cotswold. The term Pennine is the name given to these Cotswold shapes when decorated with an amber glaze. The range was also available in a pale-green vitrified glaze, which was sold under the Cambrian name. Oven-to-tableware proved to be one of the major innovations of the time, and soon was to be seen in most households. This popular range is often recognised and remembered from people’s childhoods”

And more on Eric Owen from Wedgwood Museum site.

“Was chief modeller and sculptor for Wedgwood from 1946 to 1967 and a free lance modeller with facilities at Barlaston from 1967 until his death. He was born in the Potteries and was apprentice to a tile factory before joining Minton where he was chief modeller for 25 years. During his time with Wedgwood Owen was responsible for modelling many tableware shapes as well as a number of portrait medallions. He travelled and lectured widely, teaching for a short period at the Royal College of Art and was elected a member of the Society of Industrial Artists in 1957”