Melbourne based Artist John Hinds recently made a generous donation of 20th Century commercial tableware to the NGV International Melbourne which is large component of an exhibition running currently entitled “A Modern Life, Tablewares 1930s-1980s” . It runs 30th March 2018 to January 2019.

The collection began when John had amassed op-shop ceramics to construct tiered cake stands. Although they were fabulous, they sold slowly, and he finally abandoned the project. After he had cleared away the dross, remaining were about  100 boldly patterned plates (mostly English & Japanese) from the 60s & 70s. These were donated  to The Powerhouse in Sydney and you can view them online HERE

As always happens, John kept on finding more objects, and the idea grew of donating a more comprehensive collection to National Gallery of Victoria.

Decorative Arts collections in most Australian museums until now have concentrated on the aristocratic and the rare, and none had a comprehensive survey of post war Modern Design – in particular tableware design.

The time had come to change this John believed, and with the collaboration of the NGV which is now more focused on design, and curator Amanda Dunsmore, the idea for the exhibition was developed with enthusiasm.

The result is this exhibition which provides an timely overview of  Modern Tableware Design, 1930s to 1980s.

“The period following the Second World War witnessed enormous changes in society…… A more optimistic outlook following the grimness of the war years saw a reaction against enforced functionalist austerity with an embrace of bold colour and pattern in the home. This exhibition illustrates the growing engagement with modern design by commercial manufacturers, charting the application of technical innovations in production and decorative techniques in pursuit of commercially competitive products.

The exhibition features works from the 1930s to the 1980s from leading manufacturers and designers across Britain, America, Japan and continental Europe. Whilst focusing on ceramics, the exhibition also explores the use of new materials ……including plastic, aluminium and stainless steel. Graphic design and advertising from the period form a feature of the show” 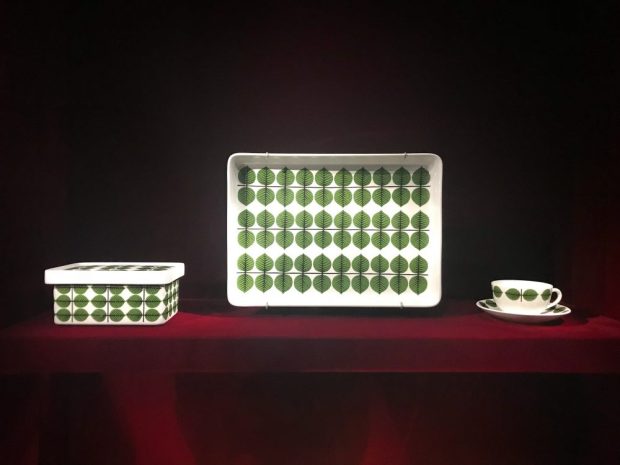