Raija Uosikkinen (1923- 2004) worked as a painter and decoration designer at Arabia Finland 1947-1986.  She and Esteri Tomula were pivotal to the success of Arabia Finland when the product lines were revamped in the later 1940s and 1950s.  Kaj Franck was responsible for most of the forms or shapes which the designs by Raija and Esteri were added to.

The very popular design “Ali” by Raija Uosikkinen designed in 1964 was produced until 1975. It came in both Blue and Brown variations, but the blue seems to be the more popular. “Ali” was also the last design on copperplate from the Arabia Finland factory. 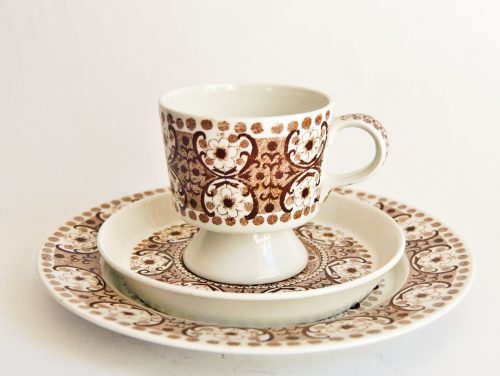 One of Raija’s most coveted , and now most expensive designs to purchase on the secondary market is the beautiful “Emilia” which was produced c1957-1966. It features charming crisp black and white graphics of a whimsical nature – some purported to be about the daily life of Uosikkinen´s American aunt’s life. Other motifs feature garden scenes, market scenes, and other depictions of daily life. END_OF_DOCUMENT_TOKEN_TO_BE_REPLACED