This story is a charming personal interpretation, from a Danish perspective, about the Bjorn Wiinblad series of calendar plaques for Nymolle. It was orignally published on the original iteration of this site “Retro Pottery Net” in 2011. It is told by Karen from Denmark, who was of great assistance to me when I first started this blog/website way back in 2009, especially with translations, and the work of Bjorn Wiinblad which she admires and collects.

The month plaques are a series of twelve plaques that Bjørn Wiinblad designed sometime in the nineteen- fifties or sixties. The drawings tell us about the Danish weather and traditions in the twelve months of the year, but they are also a continuous story about a couple who fall in love and have a baby. Each plaque has a title written on the back, which will give you a hint on how the story progresses. These month plaques were sold from Danish stores for a period of about thirty years, so they are not that rare, but have continued  to be popular to this day. Each plaque has its own priceless charm and beauty which I hope you will enjoy as much as I do.

When I was a child, we had around six of the plaques hanging in our kitchen, since my mother thought that twelve plaques were too much on a single wall. I quickly discovered that they were just part of a story, so whenever I visited friends who had all the plaques, I scrutinized them with great interest, as I was trying to put the whole story together.

In my teenage years I began to wonder in which age the story takes place, but they dress so differently on the plaques that it is impossible. I guess it just takes place in Bjørn Wiinbad’s enchanted romantic world, with a different dress code and better weather than in everyday Denmark.

Today I have all the month plaques plus a few extra hanging in my own kitchen, so now I am able to share the whole story. 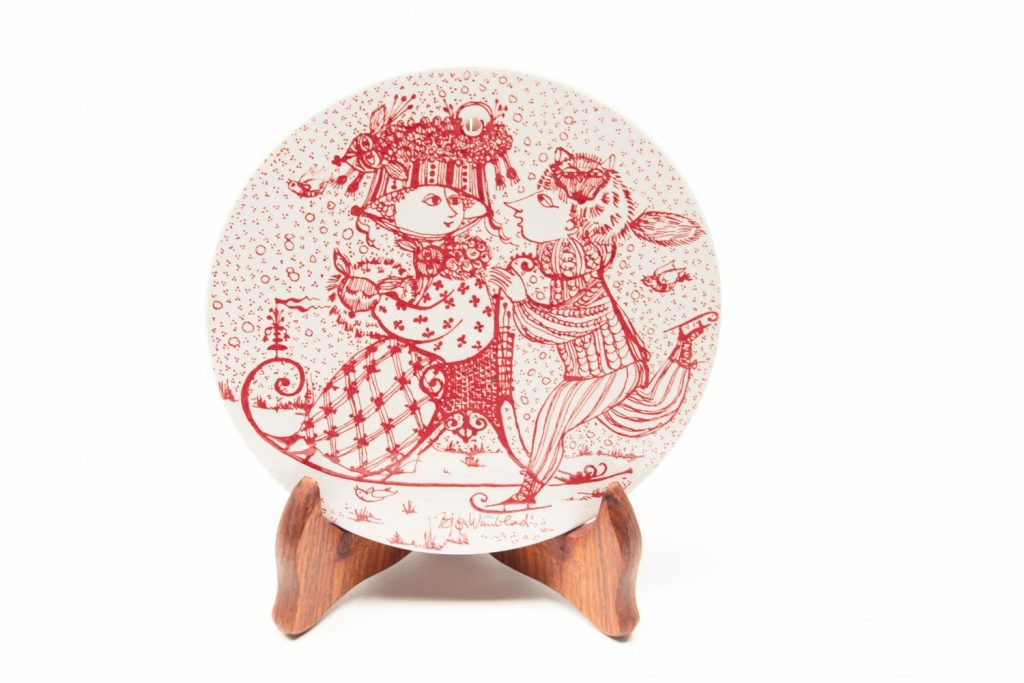 This is where the couple first meet. The young man is ice skating which is quite normal at this time of year. But the young lady is in some sort of ice sled that I have never seen in my time and age. It looks like a picture from around 1900 – but surely, a romantic scene for a first encounter. A quite morbid detail however, is all the fur with stuffed animal faces – two hats, a scarf and a muff. 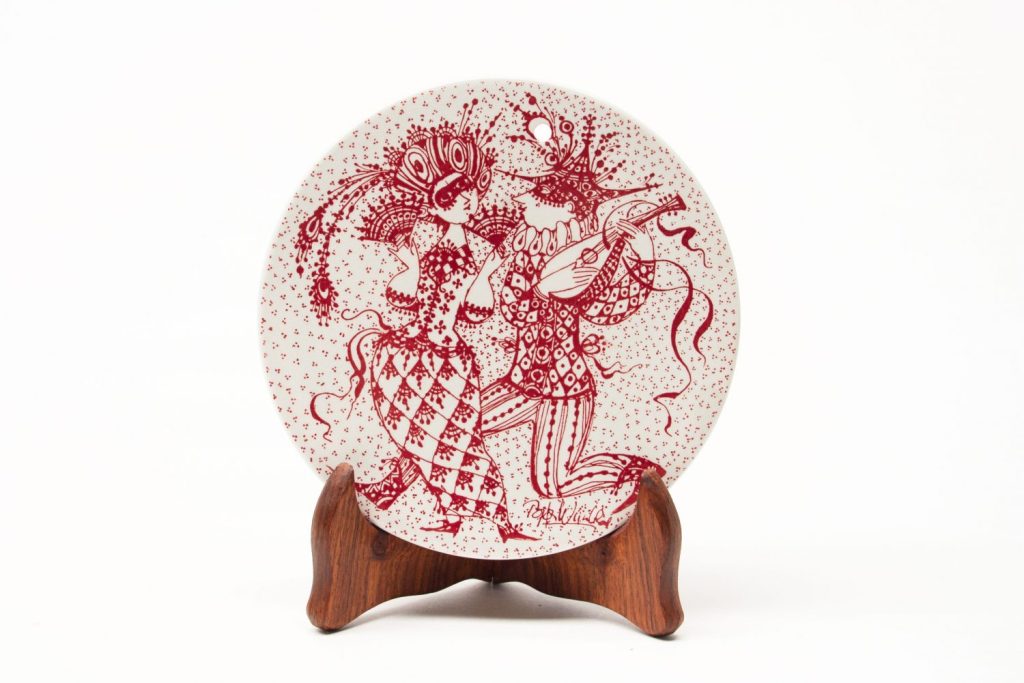 Our couple have dressed up in February. Masquerades are not that common, so I guess this refers to “Fastelavn”. That is a Danish tradition where mainly the children dress up and “beat the cat off the barrel” – a medieval tradition that resembles the Mexican Piñata. 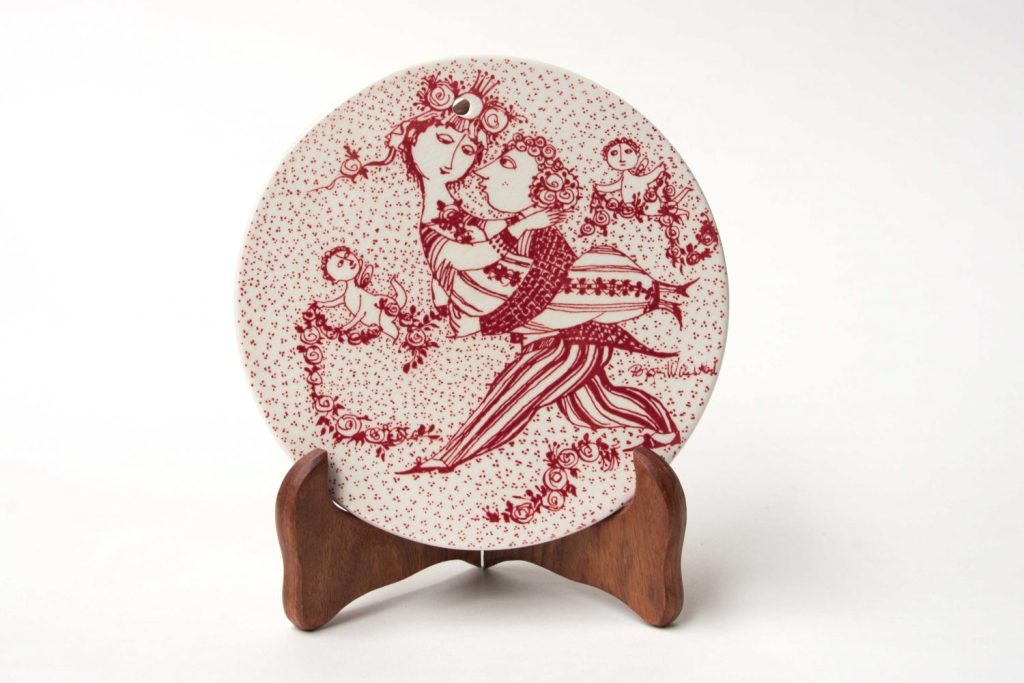 Still partying indoors I guess, since there are certainly no roses outside at this time of the year. The cupids suggest that this is where our young man wins the lady’s heart – and maybe some more….so let me just say that a baby is born nine months later. 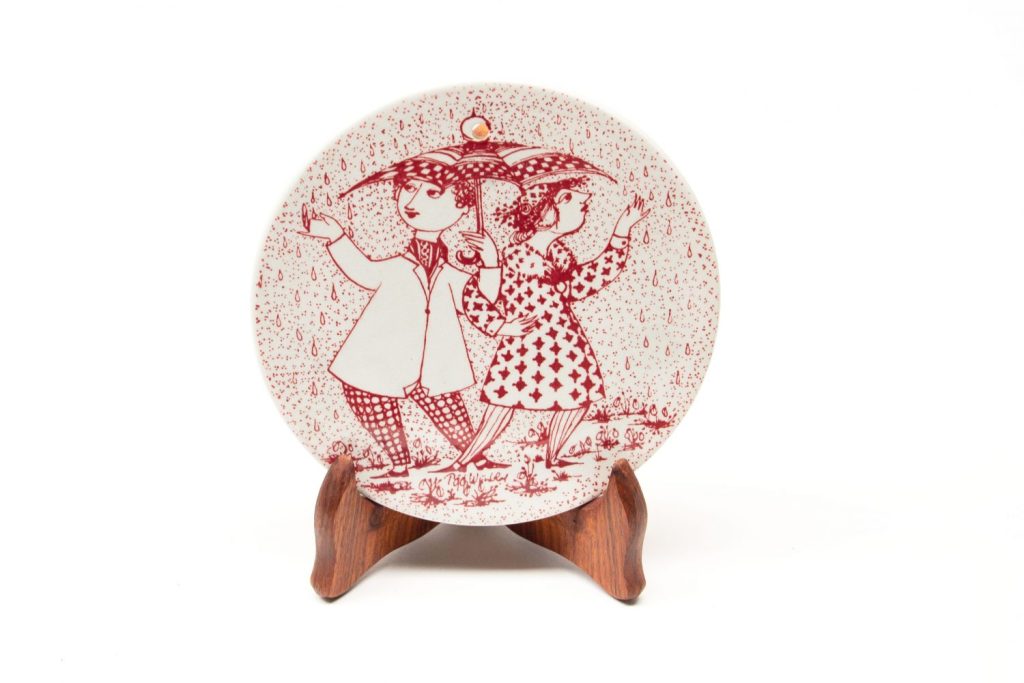 This is the only plaque where it rains – should this have been a realistic story, there ought to have been rain on at least two or three other plaques. My guess is that in April she finds out she is pregnant and he gets cold feet. The rain in April is certainly realistic, but so are their clothes. Gone are the flowers in their hair and the long dresses, they look just like an everyday young couple waiting at a bus stop. They are both holding out their hands to feel if the rain stops, so I guess there is hope for the future. 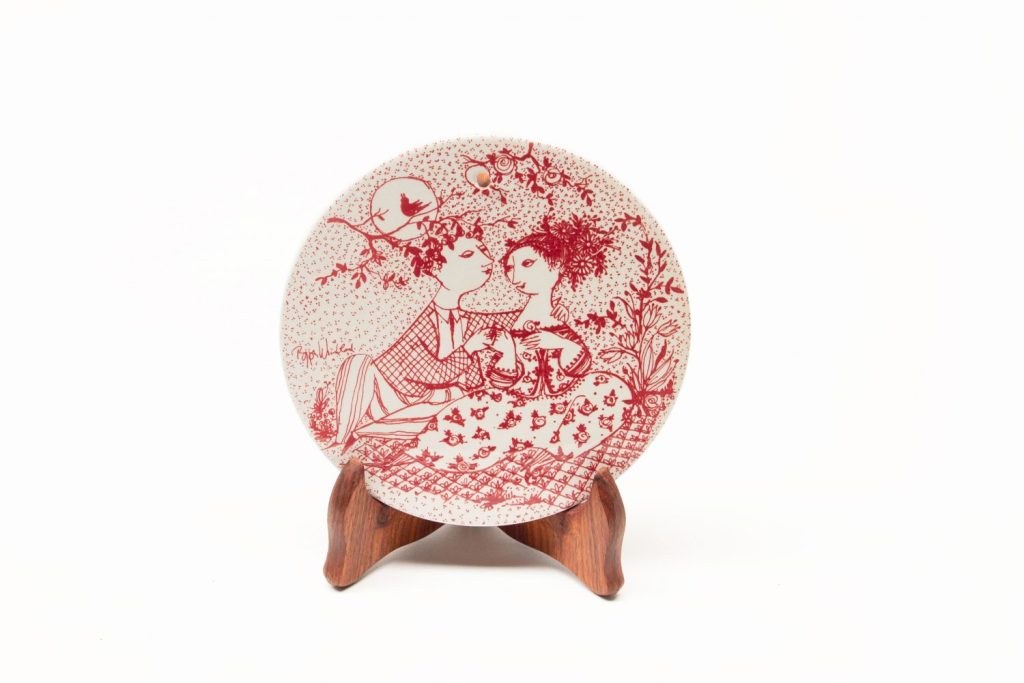 Back together again – and the weather is how we always dream it should be in May. So they have gotten used to the idea of being parents it seems. Notice how Wiinblad has tried to incorporate the little holes at the top of the plaques in the motives. It works on this plaque, but on the April plaque the hole is too low be at the top of the umbrella. This annoyed me quite a bit when I was a child, but now I find it rather charming. END_OF_DOCUMENT_TOKEN_TO_BE_REPLACED