When I first found the Midwinter Pottery items in the first image below at an auction, I was reminded of the work of French artist Leger…….I was on the right track at least (French)

I found a record of the design in the Midwinter Pottery book by Steven Jenkins. The design is called Desert Scene, and is a transfer print from a painting by Cobelle – It is known as a pattern on a range of dinner ware in the “Fashion Shape” (c 1955-1960) 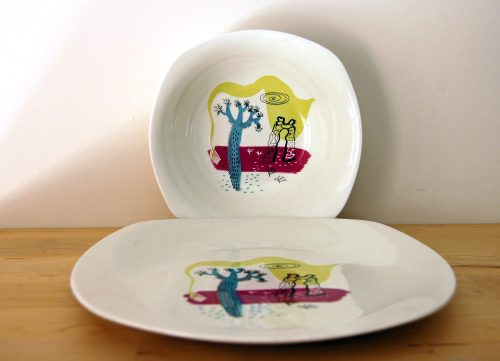 Here is a fascinating summary of the life and work of Cobelle from Wikipedia:

Cobelle received his Bachelor’s and Master’s Degrees from the University of Munich and continued his studies at the École des Beaux-Arts in Paris. Much more influential in his development, however, were his private studies with Marc Chagall and his apprenticeship in the studio of Raoul Dufy in Menton on the Riviera.

Cobelle lived and painted in Paris until the late 1920s and established himself within the great tradition of the School of Paris. In the late 1920s, Cobelle moved to the United States, where his paintings were immediately sought after by galleries and private collectors alike. Cobelle became a U.S. citizen before the outbreak of World War II. In the late 1940s to 1950s, Cobelle lived in Westport, Connecticut

By the 1950s, spurred by the commercial success of his mentor, Dufy, Cobelle had achieved phenomenal success commercially with his Parisian-influenced style. Much like contemporary artists and designers at the time, his designs graced a number of pottery patterns for various pottery companies, including Midwinter Stylecraft, Universal Potteries and Homer Laughlin China Company

In addition to creating advertising illustrations for everything from hosiery to French perfume, Cobelle created a number of murals throughout the country in noteworthy public locations such as The Painted Desert Room of the Desert Inn in Las Vegas the Mark Hopkins Hotel in San Francisco Neiman-Marcus in Dallas and on the cruise ships of the Holland America Line

Throughout his long and prosperous career, Cobelle painted his favorite subjects; Paris street scenes, race tracks, regattas and casinos. The subjects in Cobelle’s paintings were not of actual locations or events, but they nevertheless convey the excitement of the places that they depict. This imagery, combined with a vibrant palette of expressive colors, creates a world full of verve and wit that effortlessly transcends reality. His paintings are characterized by thin, descriptive line-work over broad patches of bold color. First, Cobelle would map out a scene in blocks of bold, expressive color. Then, he would define the imagery with spontaneous, fluid line work. Many of his paintings were painted on canvas with mixed media – oils, acrylics, tempera, conte crayon, ink, whatever was at hand.

Cobelle’s Midwinter designs don’t seem to appear often, but I did find these on ebay recently. As far as I can find out Midwinter only used these 2 designs by Cobelle.