Thorkild Ohlsen (1890-1973) was a Danish landscape painter and porcelain designer who produced a number of significant porcelain dinner services for Royal Copenhagen beginning in the early 1930’s.

Ohlsen was originally employed by Royal Copenhagen Porcelain in 1908, and was an important collaborator of Nils Thorsson. He continued to paint and exhibit his work during his lifetime.

At Royal Copenhagen he worked with both modeling and decoration, especially over-and underglaze painting, and he participated in the development of glazes. In his early work, a series of crackle ware from 1920 , is the decoration of iron red and gold, usually with botanical motifs.

I think one of the most elegant dinnerware ranges he designed was “Fensmark” c1930s– named after a town in Denmark of the same name. It is also known by its pattern number “1010”. It was in production for decades and the forms were used on a number of dinnerware series. 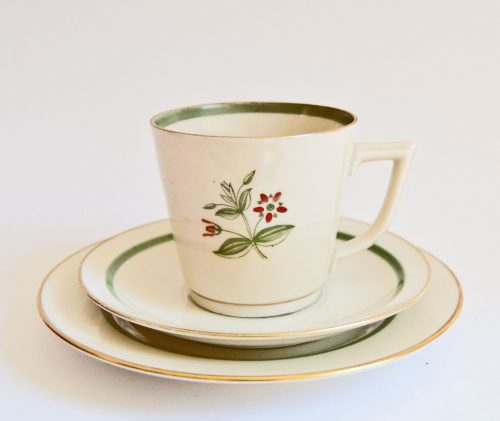 The botanical drawing seems to be of “Quaking grass” in flower. The shapes in this range are beautifully elegant, and so typical of the late Art Deco period, with shapes starting to round off a bit, but with features such as Ziggurat style steps still present.