This beautiful and elegant stoneware dinnerware is Gustavsberg “Eldorado”. It is a design by Wilhelm Kage (b1889-d1960) for Gustavsberg, designed in 1936 by Wilhelm and in production much later from 1956-1962 (post the retirement of Kage). During the 1920 and 1930’s Kage designed over 30 dinnerware designs at Gustavsberg, several of which went into production post his retirement.

The dinnerware set of Eldorado consisted of serving dishes, casseroles, ramekins, plates etc. – but I’m unsure if cups/teapots etc were produced – I havent been able to locate any images of such.

So far I have come across 3 main variations of this design – Brun (a brown ochre colour),  Pastell ( a yellow colour ), and Grun (pale green) but there seem to be more out there – I also found a bowl with a hand-painted stripe pattern on a clear glaze. (see last photos below). The brown appears to have been the most popular going by the quantity available now on the secondary market. 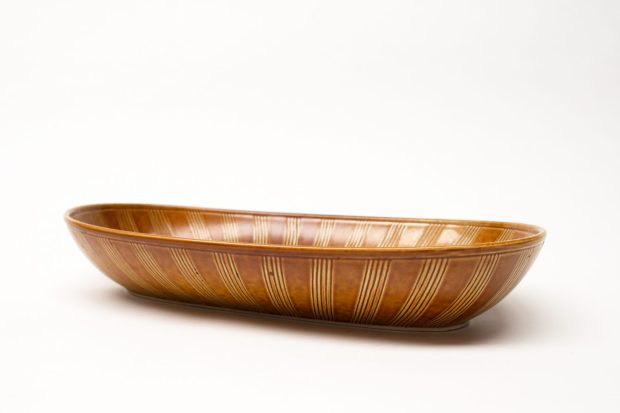 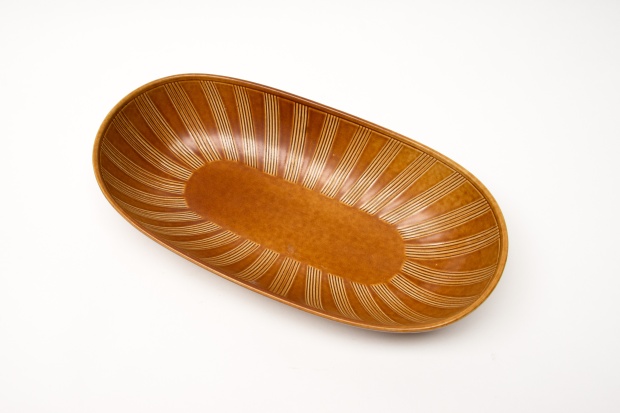 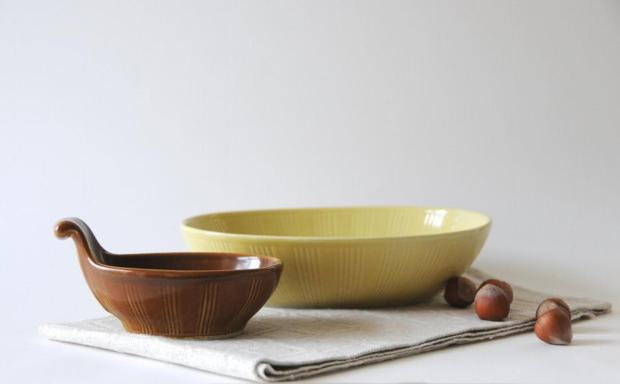 Doing research into more about this smart dinnerware design, I came across an interesting article in the American Publication, Ceramics Monthly August 1954.  It is a very interesting read, although this design is not mentioned – here is an excerpt….

“As a result of Sweden’s highly successful government campaign to “put beauty into everyday living,” the Swedish people appreciate and purchase the work of their craftsmen, including the ceramists. Although many of the ceramists are strictly studio potters, selling through retail outlets, others are employed as staff artists at great pot- tery plants where they design for mass production and also create distinguished individual pieces. Three such designer-craftsmen are Kage, Lindberg and Friberg -a trinity at the Gustavsberg factory  whose works and ways are presented here.

TITAN among world designers of ceramics, Wilhelm Kage enjoys the luxury of retirement by creating finer pieces than ever! Having, he says, shoved the responsibility of managing Gustavsberg’s art department onto Stig Lindberg, he now has opportunity to concentrate on his beloved stoneware.

To have time sitting obediently at his elbow is indeed new to Kage. Coming to Gustavsberg in 1917, he took on the task of setting up and running a design division at a time when Swedish ceramics had hit such an all time low that a national effort was being made to do something about it. His new thinking and fine patterns began to change the picture at once, and his record as a dinnerware designer through the years is one of consistent achievement.

But beyond his china designing and management–a monumental job–he began to develop his own art ceramics. In 1926 he hit upon his idea for decorative stoneware, and the first of his famous Farsta ware came into being. But he was unable to devote time to it because the demand was so great for art items which could be produced in larger quantities. To meet this demand, he developed something entirely new–a combination of earthenware and silver called ~’Argenta” and still one of the plant’s best sellers.

Moving a little ahead of the times, Kage also created an ultra modern line called “Surrea,” a white stoneware of striking decor. Another of his major contributions is the decorative line, “‘Cintra.” This ware is fine bone china, hand thrown, so delicate as to be translucent. It is not glazed at all, the soft colour tints being achieved by chemicals in the raw clay body.”

The article goes on to discuss the work of Lindberg and Fiberg with some interesting insights into their work.

Finally 2 photos of an Eldorado form, but with hand painted decoration: