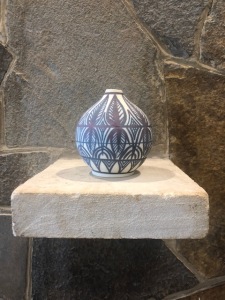 Thank you to Emma for sending a photo of piece by Ilja Chapoff (previous posts). This piece has a similar style of pattern and brush technique to the first piece by this Artist which I came across – and appears to have been from the same exhibition/gallery going by the labelling on the base.

As a fascinating side note I have come across an photo of a large mural painted by Ilja before he came to Australia as a WW2 refugee from Czechoslovakia.

I cant post the image here as it is a “stock image” – but HERE is the link to it.

The mural is in the Dormition Church at the Olsany Cemetery in Prague, Czech Republic, and the caption says this is one of several murals painted 1941-1945 by a group of Russian Icon Painters after a design by Ivan Bilibin. I knew that Ilja worked as an Artist in Prague before migrating to Australia, but until now didn’t know in what capacity or field…so it is fascinating to be building up a background story every so slowly of this talented artist and craftsman.