This article is a combination//summary of articles about Dybdahl Pottery, Denmark which I had posted on the previous incarnation of this website.

Dybdahl Pottery, Denmark is one of the first Danish Potteries that really grabbed my attention. The patterns, decoration and unique nature of the forms and designs captivated me over 15 years ago when I first discovered it, and I continue to find new forms and decorations which I haven’t seen previously.

Margrethe was educated at the Rostrup-Boyesen Art School 1934-1936 and the Danish Design School 1936-1937 where she met Palle. Margrethe was never a potter but a very accomplished painter and decorator of pottery. It is probably the quirkiness and unique gentleness of many of her designs which attract me – she was able to communicate such joy and feeling with her painting and design.

Below: My first ever piece of Dybdahl Pottery – a stunning large teapot, beautifully decorated and constructed. 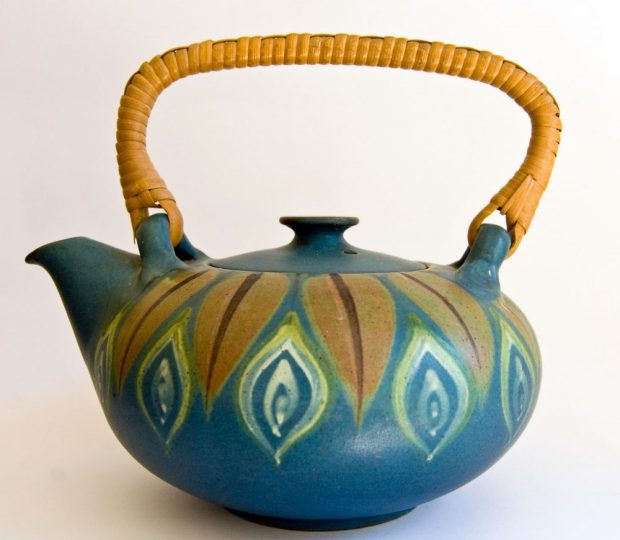 Palle and Margrethe had started up their first workshop together in Hørsholm 1952-1959. They had 2 to 3 apprentices here. They bought their house in Allerød circa 1958 and established a workshop in what was previously a stable next to the house. The house is located in a beautiful area surrounded by woods and was probably the inspiration for many of Margrethe’s nature motifs (insects, bees, spiders, birds, leaf patterns, etc.). They lived and worked here until they died, both at age 83, two years apart.

At the peak of their production there were 9 people working in the Dybdahl Pottery, including Palle and Margrethe. Margrethe was the main decorator of the figurative pieces. They usually had 3 or 4 apprentices through a rotation, and one who was there the longest was Lasse Birk, who is still active in the town of Birkerød. Lasse continued to work for Palle after his apprenticeship was completed. Another apprentice at Dybdahls for a period was Andy Blick who kindly provided me with some lovely old photos below taken during his apprenticeship.

One of the most popular items of Dybdahl Pottery are the charming little birds in the forms of salt dishes, bowls, mustard pots etc. These are from the earliest days of the pottery – and were produced in large numbers and a variety of sizes and decorations. Another popular item which you can often find are the rectangular baking dishes – these were slump moulded pieces – and many of the moulds are still in use as they were left to Lasse Birk by Palle. These are hard earthenware pieces – fired to around 1180c – so have a different “sound” to stoneware when tapped. 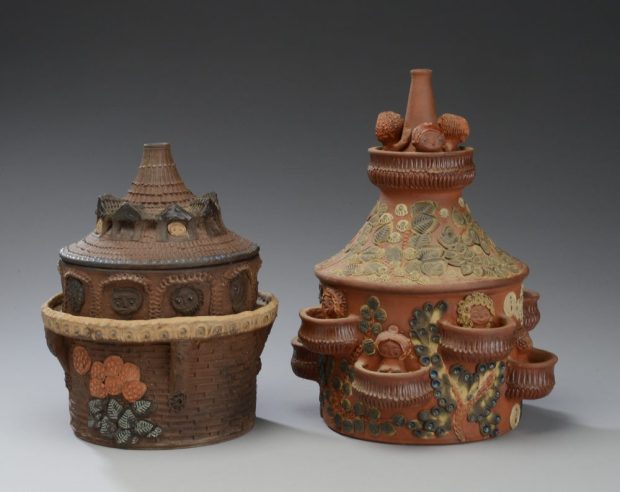 Other popular items include tiles, bowls, dishes, sculptural pieces, and decorative items like large hanging eggs. The Dybdahls sold their pottery from their workshop and also from Den Permanente. They did not have an agent and sold everything themselves. They exported overseas regularly as well.

Every piece of Dybdahl pottery I have found has been signed “Dybdahl Denmark”, and will often have other information such as “ovenfast” (which the serving dishes), sometimes initials or other information. 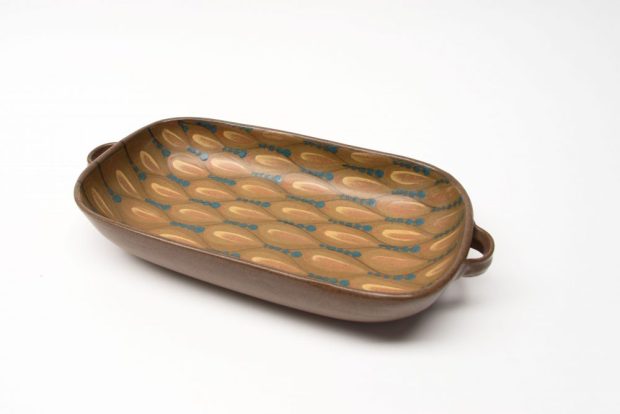 Palle Dybdahl taken by Andy Blick during his time at Dybdahl Pottery.