Royal Tettau is a German/Bavarian Porcelain manufacturer with a long history starting in 1794.

This very stylish design by Royal Tettau dates to between 1954 to 1968 and from what I can see, the forms of this series are called “Ria”, and the pattern is  “no. 1347, grauer Rand” (Grey Border), although these 2 terms are often transposed online and you can often find it simply called “Ria” and in Germany “Ria, 1347 Grauer Rand”

The lovely line pattern reminds me of Jessie Tait’s Midwinter “Sienna” design. The shapes are very elegant, stylish and speak of the 1950’s.

The PM&M site has a good history of this company, including the backstamps HERE 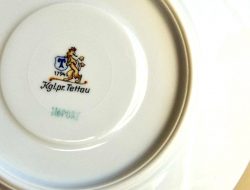