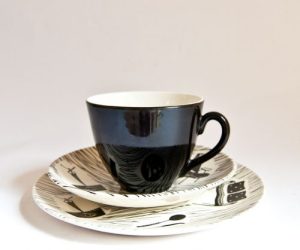 Homemaker was designed in 1957 by Enid Seeny and Tom Arnold for Ridgway and was sold through Woolworth’s. It had a long production run and was still made as late as 1968 such was its popularity.

The following is an extract from the Obituary for Enid Seeney, written by Simon Moss in the Gaurdian, May 9th 2011.

From an early age Enid had wanted become a designer of surface decoration in the ceramic industry.  She attended Burslem School of Art in Stoke on Trent an  subsequently became the first woman to be trained in the Spode Copeland design studio, before joining a young team of artists at Booths and Colclough, part of the Ridgway group, in 1951. Headed by its director Tom Arnold, this new unit was producing some exciting designs, and Seeney’s Samoa and English Garden were both chosen for exhibition at the Design Centre in London.

Her early work was typified by stylised floral motifs, often executed in pen and ink, and this fine line technique was perfectly suited to the new movements in postwar design, typified by Alexander Calder’s mobiles and the spindly furniture Seeney saw in magazines.

In earlier decades, most plates had rims, but American-style coupe shape plates were coming into fashion, along with new manufacturing techniques, so when she was challenged by Arnold to produce an “all-over” pattern for a plate, Seeney created Furniture. The motifs depicted domestic items, some of which were far beyond the reach of the average family, including Robin Day’s reclining chair and a Sigvard Bernadotte sofa.

It is quite sad to read the rest of the Enid’s story, as she left the industry only 4 months after designing Homemaker, undertaking some mundane jobs never working as a designer again, and didn’t know until later that Homemaker had become such a hit – but she followed its popularity with pride and interest.

I have only ever had a few pieces of Homemaker, pictured below. To see a large variety of the forms and decorations in all their glory go to the V&A Collections website. 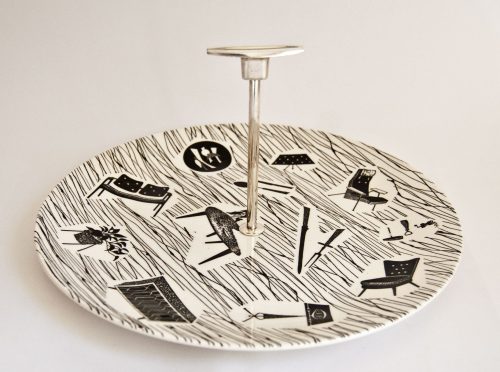 The following background information about the design is from the V&A website pages for this design:

Aimed at the middle to lower income consumer, Homemaker tableware was retailed through Woolworth’s between 1955 and 1968. The images of 1950s Contemporary style domestic furniture and furnishings as decoration on such humble household products, proved particularly popular acting as a style guide to what one ought to have in their modern interiors. Some of the images are recognisable ‘high design’ such as Robin Day’s reclining armchair and others are representative of more popular design of the period, like the boomerang-shaped table.

A complete range of tableware was produced by Ridgway with the Homemaker design, including full dinner and tea and coffee sets, tureens and serving platters. In terms of what was actually happening in design in 1957 when Homemaker was fist released, many of the objects depicted in the decoration were well established icons. Certainly by 1968 these objects would have looked very out-of-date…….The economy of the manufacturing process is demonstrated in the application of the transfer printing on the more complex shapes, like the coffee and tea pots, where the large transfer has simply been cut into smaller pieces and applied in pieces around the shape” [Susan McCormack, ‘British Design at Home’, p.141]

The book, “Homemaker: A 1950s Design Classic”, by Simon Moss was published in 1997, on the 40th anniversary of the initial Woolworths order. It is now out of print, but you can find some copies online at very high prices.