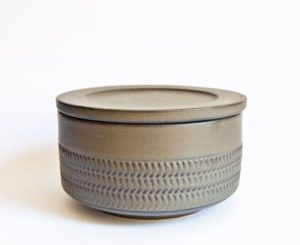 An interview with Gill Pemberton and her early years at Denby Pottery. A fascinating glimpse into how the Chevron design developed and life in a pottery works in the 1960s. The interview was originally published on my first website in 2010 (Retro Pottery Net)

Yes, THE Gill Pemberton! she who designed the renowned and admired Denby Chevron, and Arabesque amongst others. Gill contacted me a while ago when she had discovered my blog – and clarified a few things I wasn’t clear on with the production of Arabesque.

Gill left Denby in 1981 and pursued a whole different career which I hope we have the chance to discuss in another interview, but for now lets hear all about Chevron.

Gill, At Art College what were your major studies and preferences,…. were you planning to become a ceramic designer?

I won a scholarship to study at Birmingham College of Art and Crafts for 4 years, first 2 years general art and crafts (lettering, life drawing, silver, sculpture, embroidery, and pottery etc), for the last 2 I chose to specialise in Pottery.

….Then I got a place at The Royal College of Art in London, to study Industrial Ceramics for 3 years. In my first year, we all had to choose, study, draw, and MAKE some pottery piece in the Victoria and Albert Museum. I chose a small 18th century china teapot, covered with enamel painted flowers. It took a year of hard slog, but I learned SO MUCH about modelling, mould making, glazing, not to mention making the body, and of course that flower painting!

It was such an incredible experience to be able to handle such a fragile ,beautiful piece, almost in touch with the maker…..and modelling the handle and spout….in the shape of a dragon!, It showed me skills I didn’t know I had !

I spent many warm happy hours in the V&A,…..no TV in those days ! And no money to heat my basic bedsit! Looking back I can see the value of all that time looking at and sketching such treasures.

We also had the opportunity each week to do life drawing, taught by Arnold Machin [he of the Queen’s head on stamps and coins], and looking back again I see how much I learned from him about form, volume, shape, not to mention how to draw !

I spent the next 2 years making stacking teapots, cups jugs, and doing the obligatory flower painting. In the fifties England was in very austere times, not much had changed since the thirties, and rationing and restrictions on the pottery industry meant they wanted designers who could do beautiful watercolour flower sprays on existing shapes, but this was NOT for me ! I was quite sure I could produce MUCH better tableware than was in the shops, so YES, I did plan on being a designer, but not the kind Stoke on Trent wanted!

Were you given a specific brief, role or an outline of what Denby wanted when you started as a designer starting with Denby?

Luckily for me Denby saw my work at college and I began work at their other factory, “Lovatts”, at Langley Mill, in Nottinghamshire. Another stoneware “out pottery” [not part of the stoke potteries] Denby, in Derbyshire had just bought it. I only worked 3 days a week as the pay was so poor, and I taught at Birmingham College one evening a week .

On arrival at the pottery, no one quite knew what I was supposed to do…..I managed to sell them my student stacking catering ware, adapted for their method of manufacture, and spent most of my time working with the throwers and turners.

It seems like soon after starting at Denby you designed two of the most iconic designs in Ceramics from the mid-twentieth century….starting with CHEVRON …was the idea for this already forming in your head before starting on it, or was there something in particular that inspired it?

Well, In the slack time on the factory floor in January and February, whisky flagons and cheese jars were made in bulk, and I was chatting to the turner when he was turning these, using a roulette as decoration……I persuaded him to put more of these decorations on one, and BINGO! that was how Chevron started. Thank goodness the boss saw it too, and suggested I work at Denby and make some casseroles.

I think I should just spend time here explaining that at Denby and Lovatt’s potteries most of the wares were crafted by hand, thrown, and turned by skilled craftsmen, unlike Stoke on Trent where most wares were slip cast or jolleyed in moulds. So for me it was a new experience to watch skilled workers making pots, instead of the way I had been taught steep learning curve!

These workers were very good to me, and eventually we had a very good relationship, Though at times they must have thought I was mad, the things I was asking them to make! One of these pieces was the very tall coffee pot, American buyer wanted a “centrepiece talking point” so for fun I got the thrower to throw the tallest cylinder he could! It went up to his armpit! And became the coffee pot for USA[ as England didn’t drink much coffee then of course ]

To start with I was asked to design a 2pint and a 4 pint casserole, using the same lid. I already had the small individual covered soup.

You have said that you prefer to work in a hands on fashion…. was there much drawing and planning involved in developing CHEVRON? – or were the design issues finalised by working on each piece as a sculptor often does.

I modelled the lugs and presented the finished glazed pots for inspection. I never did any drawing, always worked “hands on” Originally the glaze was a semi matte grey blue, later became the sage green.

So to start with I had no real brief, but the range grew until there were about 70 pieces as more markets wanted pieces. All the prototypes were made while working alongside the craftsmen, and I modelled all the handles and spouts, and struck the plates and platters, and modelled all the odd shape serving dishes along with Headley Parkin , the modeller – a wonderful quiet man of intense knowledge and skill.

What were some of the issues that had to be overcome with the design and production of CHEVRON? E.g It would have been something completely new for the throwers etc.

Yes, there were many problems , not least being a YOUNG woman designer, with the occasional sexual innuendo ! And the throwers were used to throwing round shapes, so a straight up cylinder was very new to them. I I also had to be aware of the sizes of the height of the kiln shelves, so that as many pots could be packed, remembering with stoneware each pot is placed on the kiln shelf… not stacked as with china or earthenware.

I also had to keep a sharp eye on the proportion of the pots and the number of the roulettes. and the placing of handles and spouts. As we produced more and more , the brass roulettes wore down, new ones were hand made by the engineer, but these wore out quickly, but luckily when the space race produced that miracle substance PTFE (polytetraflouroethelene) which solved the problem.

I had to draw the shape, the chevron , to send away to the manufacturers, and keep tabs on its production and use. The range had specific pieces for the American market, that coffee pot for one, and Scandinavia wanted a kettle teapot. America also wanted a bigger plate, so I had to design a coup shape plate as the one I had designed had a rim.

These days most people think of Design as a glamorous and highly desirable profession… What was it like during this period being a Designer?….particularly a Woman

NO, it was not a glamorous profession, just bloody hard work !! Being a female I had to be super good at what I did…Also I was commuting 3 days a week on ancient rail and bus, no car for me then….and I suspect no one expected me to last long!

Couldn’t be way out, it was difficult enough to be taken seriously as it was,and remember the board was totally male, along with all the foremen, so for a young slip of a girl [part-time at that] telling them what to do……. Oh and incidentally, I soon learned how to swear, that raised my street cred ! Shop floor language and culture are something else!

My favourite pieces of Chevron are the very tall soup tureen with side handle and the small lidded bowls – do you have a favourite(s) in the range?

Thank you so much Gill for sharing this with us, I know that readers of this blog will be totally fascinated by reading this story, and hanging on every word. It adds so much being able to discuss with the designer of such an iconic design, as well as hearing the human story. 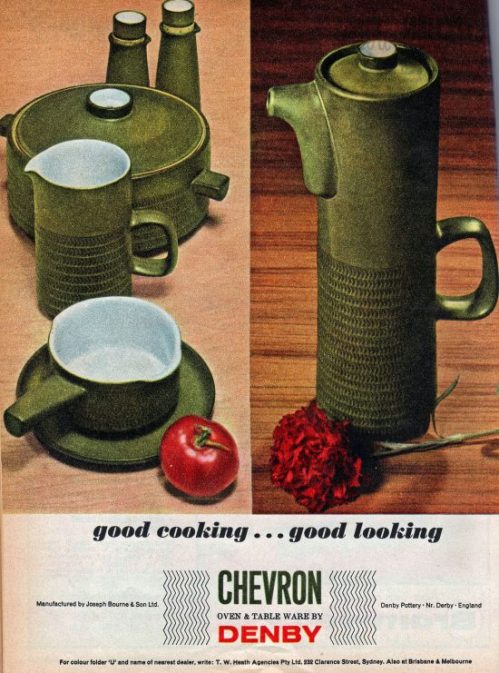 COPYRIGHT Gill Pemberton, Ray Garrod. Images Copyright Ray Garrod – Contact me if you wish to use any of the images here.